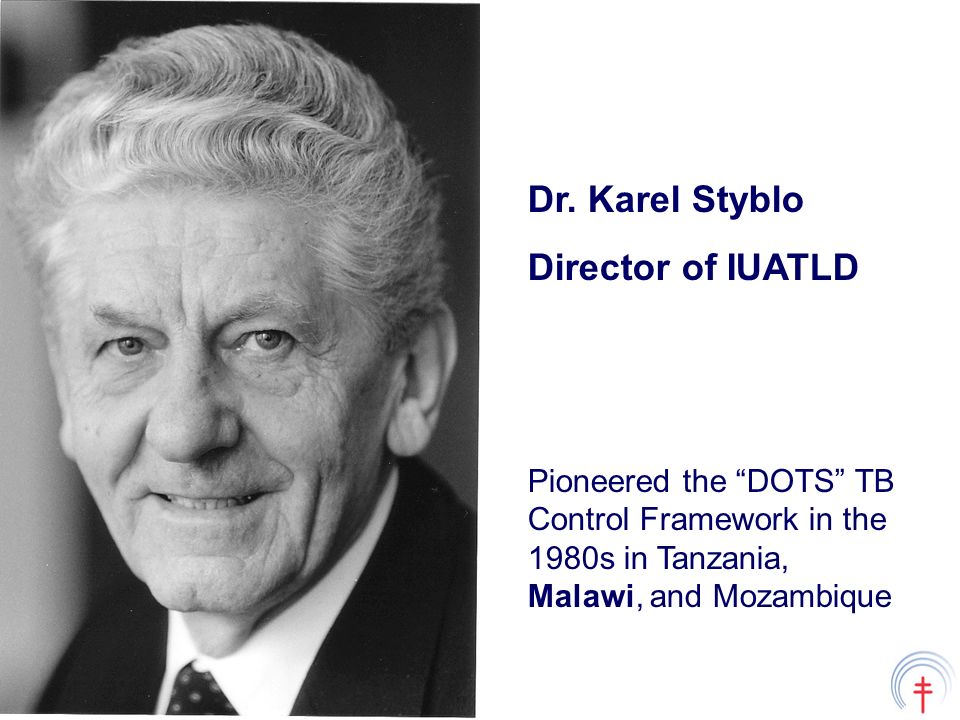 Karel Styblo was born in 1921 in what was then known as Czechoslovakia. This simple intersection of time and place would forever shape his future and ultimately give modern medicine one of its greatest heroes. In 1945, not yet 25 years of age, Styblo found himself caught up in the chaos of World War II and was imprisoned at the Mauthausen concentration camp in Austria. Mauthausen was built near an old stone quarry and prisoners were often forced to carry huge stones up the 186 steps of the "Stairway of Death." It was while imprisoned here that Styblo contracted a serious case of tuberculosis. The experience set the course for his future and, upon his recovery and release, he dedicated himself to finding a cure for this dreaded disease. Styblo went on to study medicine and developed a treatment protocol known as Directly Observed Treatment, Short-course (DOTS), which revolutionized the fight to control tuberculosis (TB) epidemics.
Tuberculosis is a life-threatening contagious disease. It is spread in a manner similar to the common cold, through the coughing or sneezing of infected individuals. It takes just a small amount of the TB bacteria to infect a second person. Tuberculosis can lay dormant for years, with infected individuals displaying no symptoms. Active TB patients, on the other hand, suffer numerous physical symptoms, including a persistent cough that yields discolored or bloody sputum, weight loss, fever, fatigue, chills, night sweats, and painful breathing. Untreated TB often results in a slow and agonizing death as the patient simply wastes away. Tuberculosis came to be known as the "Great White Plague" as it swept through Europe beginning in the 1600s. It continued to ravage Europe for over two hundred years, eventually spreading to the Americas as well. By the late 1800s tuberculosis was claiming the lives of one of every seven people in Europe and the Americas. Though now relatively rare in the developed world, TB is still one of the biggest killers in the developing world. In 2019 an estimated 1.4 million people worldwide died from tuberculosis.

Karel Styblo studied under John Crofton in the 1950s in Scotland. At that time, tuberculosis was the leading cause of death among young people in Edinburgh, Scotland, and Crofton, a professor of respiratory diseases and tuberculosis at the University of Edinburgh, was tasked with bringing it under control. He did so, with the help of his protégé, Styblo, in an amazing 6 years - just one-third of the time officials had predicted would be required.  So, he knew the treatment cured TB.

The experience of defeating TB in Scotland honed both Styblo's confidence and determination to pursue the absolute eradication of tuberculosis. Working in Tanzania in the 1970s, he knew the science well, but saw that science alone was only curing 40% of the patients.  He realized that what was missing was a system to cure TD based on human relationships.  The problem with curing TB is that it is a long and intricate process that once begun, cannot be stopped.  Because TB is a bacterial disease, it became resistant to a single drug treatment.  It requires a cocktail of multiple antibiotics, and further, they must be taken for 6-8 months without fail.  Only then will all the TB germs in the body be destroyed and a person be cured.

Styblo set about putting an infrasture around the patient to ensure that a patient was motivated to fulfill the cure.  It eventually became what today is known by the acronym DOTS, standing for Directly Observed Therapy - Short Course.

1.  Recognition that TB control is a public health responsibility with top down government support
2.  Early detection of active TB infection to set the cure cycle in motion and protect others from infection
3.  Standardized 6-8 month treatments for all patients, with directly observed treatment for the first two months
4.  Uninterrupted supplies of the 4-6 most effective TB drugs
5.  A standardized recording and reporting system to assess each patient's treatment

It's primary feature is recording the direct observation of out patients taking their meds the first two months. Full compliance with the DOTS program has a 90% cure rate. In contrast, without treatment, 70% of patients will die, usually within 4-5 years, even if they are young.

Styblo not only developed the program, but rigorously tested it, first in Tanzania, then elsewhere in Africa, again with stunning success. Styblo brought his DOTS protocol to such divergent locales as China, New York City, and India. The World Bank recognized Styblo's claim that TB was an economic problem governments should embrace. This is because so many young people were dying, removing their economic productivity.  They helped Styblo launch a pilot program among 2 million Chinese in Hebei Province. The cure rates quickly doubled, eventually reaching a stunning 94 percent.  Styblo's DOTS program has been implemented worldwide and is the accepted tuberculosis treatment protocol of the World Health Organization (WHO) and other international public health organizations.

Snippets
In the mid-1970s, a redoubtable Czech, Karel Styblo, harnessed the meager resources of the International Union against Tuberculosis and showed that, contrary to expert opinion, tuberculosis could be controlled in extremely poor countries: beginning in Tanzania.”

- JF Murray, A Century of Tuberculosis

"When Styblo asked me how many patients New York City’s TB program had cured, it shamed me into implementing a program to track the outcome of every single patient diagnosed…the question changed my life.”
- Tom Frieden (former director of the CDC)

He will go down in history as the father of modern TB control and one of the heroes of public health of the 20th century. The principles developed by him in Africa were later adapted and promoted by WHO as DOTS, and adopted in 187 countries.
- By The Open Society Foundations Global Plan to Stop TB
Links to More About the Scientist & the Science
Karel Styblo's Wikipedia Page
https://en.wikipedia.org/wiki/Karel_Styblo
Open Society's Global Plan to Stop TB Explaining DOTS
https://www.opensocietyfoundations.org/uploads/9842fd1c-8dea-4f0d-a1e5-1d633ac64fef/tb_complete.pdf
© 2009 - 2022 ScienceHeroes.com