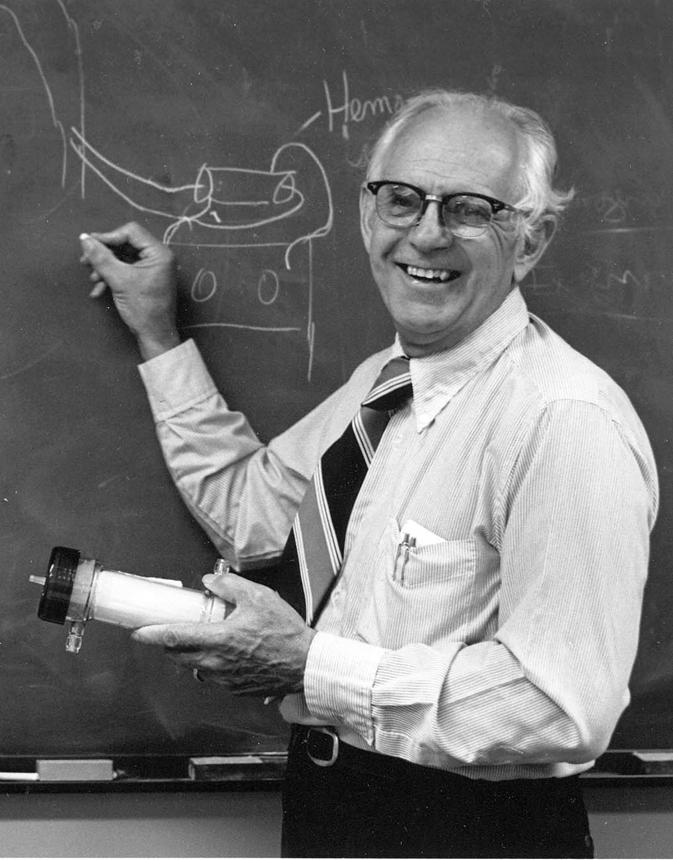 Made Long Term Dialysis Possible with His Shunt for Kidney Patients

Belding Scribner was a sickly child. He suffered from serious visual problems, which eventually required corneal transplants. In fact, it was these vision problems that shaped Scribner's medical career. He figured his poor vision would not allow him to practice in a clinical setting, so he instead opted for a career in medical research. This decision has had a profound impact on the lives of millions. Prior to 1960, end-stage kidney failure was a virtual death sentence. Though hemodialysis - the filtration of blood outside the body - was available, it could only be used on a patient a few times, due to the damage it caused to the blood vessels. Scribner changed that. He developed a shunt, made of Teflon, which made it possible for a patient to receive dialysis on an ongoing basis. His invention turned a "death sentence disease" into a disease one can manage, and live with.
The kidneys are fist-sized organs that are shaped like beans, located just below the rib cage toward the middle of the back. Though fairly small, the kidneys are powerful workhorses. Each day the kidneys filter about 200 quarts of blood to remove the impurities. These impurities, which add up to around 2 quarts per day, are then excreted in the urine. In addition to filtering out waste materials and excess water, the kidneys also process vital minerals such as potassium and sodium, and send them back to the body in appropriate amounts. This complicated filtering process takes place within the nephrons, which are tiny units that contain specialized blood vessels. Each kidney contains about one million nephrons, and when the nephrons lose their ability to filter blood, the result is what we call kidney failure. Early stages of kidney failure may produce lethargy, shortness of breath, and weakness. Swelling may occur, as the body loses its ability to eliminate excess water. As the disease progresses, more serious symptoms set in. The buildup of potassium may cause fatal heart rhythms. The excess waste materials circulating in the blood begin to affect all the major organs, resulting in congestive heart failure, decreased mental awareness, and severe anemia. Eventually the unprocessed toxins overwhelm the body and the patient falls into a coma. Without immediate intervention, through hemodialysis, the patient cannot survive.

In 1960, when Scribner saw a young man recover after dialysis, only to die shortly thereafter, he was deeply troubled. At that time dialysis was nothing more than a temporary fix, with glass tubes being used to carry the patient's blood to the dialysis machine and back. Not only was the procedure extremely painful, it also destroyed the patient's blood vessels. After just a few dialysis treatments, the patient had no remaining healthy blood vessels through which to receive treatment. Scribner wrestled with the problem nonstop. Then, in the middle of the night, he awoke with a start - he had an idea: he would create a loop that would allow a patient to receive multiple dialysis treatments. The loop would run between an artery (carrying blood away from the heart) and a vein (returning blood to the heart), serving as an entry point for the dialysis connection. This loop, known as the "Scribner Shunt," would remain permanently in place, thus avoiding the damage to the patient's arteries, and making ongoing dialysis treatments possible for the first time. Scribner's final stroke of genius came in his selection of the material. The shunt would be made of Teflon. Ironically, Scribner chose the relatively unknown material because a colleague told him it would not react with human tissue. It wasn't until later Scribner realized the most significant advantage of Teflon: its non-stick properties meant the blood would not clot, which had been a major problem with the glass shunts. The Scribner Shunt, first envisioned in a middle-of-the-night revelation, has since prevented kidney failure being terminal.

Scribner soon became aware of the dilemma health providers had to face. His shunt was a tremendous success, literally offering a reprieve from death to the sickest patients. But that led to the question of which patients should be saved? At the time, there were not enough dialysis machines to meet the need, and the cost of the treatments was far beyond what most could afford. Scribner enlisted the help of the King County (Washington) Medical Society, which established "The Life and Death Committee." This committee, meeting privately and possessing irrevocable authority, made the difficult decisions about who would - and who would not - receive the lifesaving dialysis treatments. It was a bitter pill for Scribner to swallow, but at the time he felt he had no choice. However, he would remain a lifelong advocate for universal access to medical care. It was largely through his efforts that Congress enacted legislation in 1973, that authorized reimbursement by Medicare for dialysis. Many view this dilemma, known as the "Seattle Experience," as the beginning of the field of bioethics.

Scribner did not stop there. To provide dialysis on a routine basis, he turned to the King County Medical Scoiety and together they built the world's first outpatient dialysis center in 1962.  Such centers are now common, keeping 500,000 people a year alive in the US. alone.

Snippets
Clyde Shields, a machinist dying from incurable kidney disease was the first person to use the Scribner shunt in 1960. Shields said, “It took so much of that waste I'd stored up out of me that it was just like turning on the light from the darkness.” He used it continuously for dialysis for 11 more years, before he died.

Scribner was not about to let the cost of dialysis be the basis of who received treatment. He threw his efforts into ensuring that all patients needing dialysis could receive it by being the driving force behind legislation enacted in 1973 providing Medicare reimbursement for dialysis.