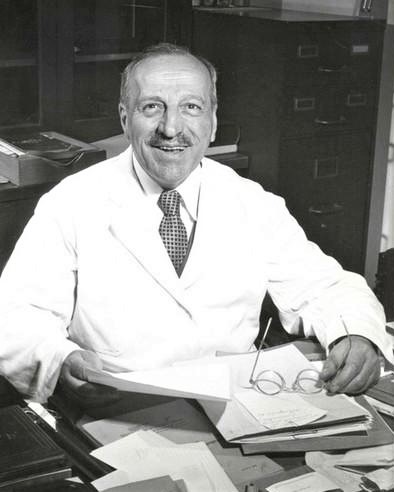 Developed the Pap Smear, Preventing Many Deaths from Cervical Cancer

As a young boy, growing up on the Greek island of Euboea, Georgios Papanikolaou loved the sea. He spent endless days sailing alone, dreaming of the day when he would be old enough to join the navy. But, as often happens, Papanikolaou was called upon to carry on the family business. In this case the family business was medicine, as Papanikolaou's father was a doctor. After earning his medical degree from the University of Athens, Papanikolaou decided he would dedicate himself to biological research. This was a relatively new field of study, just in its infancy in Greece, and this led him to move to the United States. It was in New York that Papanikolaou made a discovery of incredible significance to women. He devised a gynecology screening method, known as the Pap smear, which allowed him to detect premalignant conditions. This allowed these conditions to be treated, thus avoiding the development of cervical cancer.
Cervical cancer forms in the cervix, the narrow lower end of the uterus that connects to the top of the vagina. The detection of cervical cancer, prior to the Pap smear, was often difficult. This is due to the fact that cervical cancer is both slow growing and often the initial cellular changes that take place within the cervix, during the premalignant stage, rarely cause symptoms. So, before the Pap smear, cervical cancer was usually not detected until it reached an advanced stage. This was very often too late and, despite aggressive treatment, resulted in the death of the affected woman. Papanikolaou’s new test changed this. The Pap smear was able to detect these cellular changes before they became cancerous. He collected samples of cells from the cervix and then smeared them on a laboratory slide. This slide was then examined under a microscope to look for abnormalities that showed premalignant conditions. Caught early, these premalignant conditions can be successfully treated. This not only spares many women from cervical cancer, but also retains their ability to become pregnant and have children. Since the widespread introduction of the Pap smear, deaths from cervical cancer have dropped over 70 percent.

Papanikolaou’s procedure was a monumental breakthrough. But, as medical history has consistently shown, change is hard and breakthroughs are often unwelcome. Though Papanikolaou made his discovery in 1928, it was not until the 1940s that the Pap smear found acceptance within the medical community. Even then it would take years for the lifesaving test to reach many of the women of the world. Eva Peron, in fact, died in 1952 of cervical cancer in Argentina, a country where widespread use of the Pap smear did not begin until the 1960s. She was just 33 years old.

Snippets
Starting from Scratch in the USA
Papanikolaou and his wife emigrated to the U.S., arriving at Ellis Island in sight of the Statue of Liberty on October 19, 1913. Neither spoke English and their life savings of $250 barely met the minimum cash necessary to enter the U.S. at the time. Neither had a job. Mary worked at a department store as a seamstress and Papanikolaou tried being a rug salesman, a violin player in a restaurant, and a clerk at a Greek newspaper. The next year, he finally obtained a position at New York University’s Pathology Department and Cornell University Medical College’s Anatomy Department, where his wife joined him as a technician.

Papanikolaou on noticing cancer cells while examining women's vaginal fluids
"The first observation of cancer cells in the smear of the uterine cervix gave me one of the greatest thrills I ever experienced during my scientific career."

1998 Miami Cancer Center Article
“His monumental contribution proved that cancer can be beaten… the Papanikolaou screening test will remain one of the most powerful weapons against this disease. Those of us who looked upon him as a guiding star will always owe him our gratitude, and those women who were helped by his test owe him their lives.”