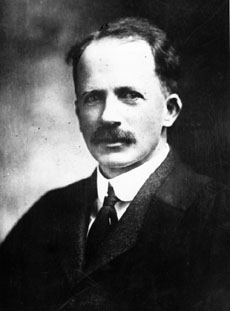 John Macleod was a world-renowned expert on carbohydrate metabolism. He conducted a vibrant laboratory at the University of Toronto and had a keen interest in diabetes, a subject about which he'd written a book. So, it was not surprising he greeted the young Frederick Banting, a struggling physician, with skepticism. Banting had a theory about diabetes, based upon a single research paper he'd read, but no hands-on research experience.
Diabetes is a disease that restricts the body's ability to produce or use insulin. Insulin is produced in the pancreas of healthy individuals and is critical to the regulation of blood sugar levels. The body runs on sugar - specifically a sugar known as glucose. Glucose is the body's primary energy source, but without insulin the body can't convert sugars, starches, and other foods into energy. Instead, the sugars build up in the system and spill into the blood. This is why diabetics must constantly test their blood to determine the amount of glucose it contains, and to determine the amount of insulin they need to effectively utilize the glucose. Type 1 diabetes indicates the inability of the body to produce insulin, while type 2 diabetes indicates the body's inability to effectively use the insulin it produces (also known as insulin resistance).  Both types can have side effects of heart disease, circulatory problems, kidney failure, blindness, and foot ulcers. Prior to Banting's discovery there were few options available to treat diabetes. Diet modification was prevalent and reasonably effective for many type-2 diabetics. But type-1 diabetes was a tragic disease. Also known as childhood diabetes, the body's complete lack of insulin leads inevitably to death. Before Banting, the only method of delaying death was a starvation diet, typically consisting of fewer than 500 calories per day. This might extend the life of tiny, emaciated children for a year. Today (2021), diabetes continues to be a major problem. Over 400 million people suffer from diabetes worldwide, and 1.5 milliion people die each year from it.

Macleod reluctantly assigned Charles Best, a young graduate student, to assist Frederick Banting with his research. This was in the spring of 1921 and, after the arrangements had been made, Macleod journeyed to his native Scotland for the summer. Upon his return to the laboratory, Macleod was met by an enthusiastic Banting, claiming a breakthrough that proved his theory.  Still skeptical after reviewing Banting's notes, Macleod insisted the experiments be repeated, ensuring the results were meticulously recorded, leaving absolutely no room for error. Macleod's dedication to precise scientific method yielded the proof the team needed to present their discovery - insulin - to the wider scientific community. Macleod put in place all the rigorous experiments needed to confirm and improve the drug so that it could be used on humans. He brought in James Collip, a skilled biochemist, to help refine and purify the raw extract developed by Banting and Best.  Macleod also changed Banting and Best‘s name for their isolated substance from 'isleton' to its familiar name today, 'insulin.' The efforts paid off and, in early 1922, the first human trials were completed. Parents with diabetic children rushed to Toronto, needing far more insulin than the researchers could produce. The University quickly partnered with the American pharmaceutical company, Lilly. There the purified form of insulin was mass-produced and became readily available to diabetics worldwide, saving millions of lives.

Written by science writer, Tim Anderson
Lives Saved:  Over 200,000,000
Snippets
No single event in the history of medicine had changed the lives of so many people, so suddenly.
-Stephen Hume, Biographer of Banting

Banting and Best named their extract isletin. Macleod overruled them and renamed it insulin.

Only five grams of insulin is circulating in a human's blood at any given time - about the amount contained in a sugar packet.

Insulin in all animals is nearly identical and can be used across species.Key Contributors
Frederick Banting
Charles Best
James "Bert" Collip
John MacleodLinks to More About the Scientist & the Science
John Macleod's Nobel Prize Biography
http://nobelprize.org/nobel_prizes/medicine/laureates/1923/macleod-bio.html