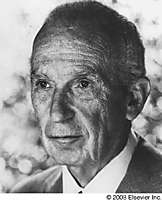 His Insights Vitalized the Study of Mammography

Discovered in 1895, x-rays were all the rage in the early 1900s, dramatically illuminating the insides of the human body, showing bones in detail. There were even attempts to use x-ray machines to find cancer in breasts. Breast cancer certainly deserved attention, since it was and is one of the most common cancers, but differentiating soft tissue in the first x-ray machines was problematic. In 1930 Stafford Warren, a radiologist from New York, performed a study indicating x-rays might perform better than doctors at finding breast cancer, but his published article didn't excite too many and progress remained slow, with small advances occurring in fits and halts.

Breast cancer refers to a malignant tumor that develops from cells in the breast. Over time, cancer cells can invade healthy breast tissue and make their way to underarm lymph nodes. Once there, they have a pathway to other parts of the body. When cancer spreads it becomes more dangerous, and how far it spreads is labeled by stages. Breast cancer is caused by genetic mistakes. 5-10% of breast cancers are due to inherited gene mutations. The rest are caused by mutations our cells make due to aging and the wear and tear of living. About one in eight women will develop invasive breast cancer in their lifetime, usually when they are older (96% occur to those over 40 years of age). This year (2021) about 280,000 cases will be found and it will cause about 43,000 deaths.

The potential to use x-rays to find breast cancer was apparent. If cancer could be found before it spreads, it could more easily be treated and irradicated. But it took till the late 1940s and Raul Leborgne in Uruguay to vitalize mammography.

Raul Leborgne was a radiologist from Uruguay and one of his insights still makes patients cringe, yet was crucial to the development of mammograms. Leborgne devised an apparatus that would squeeze a patient's breast between a cone and a compression pad in order to hold it flat while an x-ray was taken. He introduced this compression technique in 1949 and reported his findings in a landmark publication in 1951. This compression enhanced the quality of the images. Using it, he was better able to see small structures and use spot/magnification.  He was the first  to report the significance of radiographically detectable microcalcifications, “which may be seen in extensive as well as incipient lesions.”  Finding them in 30% of cancers, Leborgne gave radiologists something more to look for. He went on to describe the radiographic differences between benign and malignant calcifications. He also encouraged radiological parameters be adopted for exposure times. For his comprehensive approach, he has been called the father of modern mammography.

His methods set the stage for our current techniques, and for improved detection and diagnosis. Early diagnosis of breast cancer significantly improves survival rates. Mammography became routine in the 1970s and has continued to improve. Since 1990 it has helped reduce breast cancer mortality 40%.

Written by science writer, April Ingram
Lives Saved:  Over 12,000,000Snippets
Early Detection Works. If breast cancer has not left the breast, the 5-year survival rate of women with this disease is 99%.Key Contributors
Warren Stafford
Raul Leborgne
Robert EganLinks to More About the Scientist & the Science