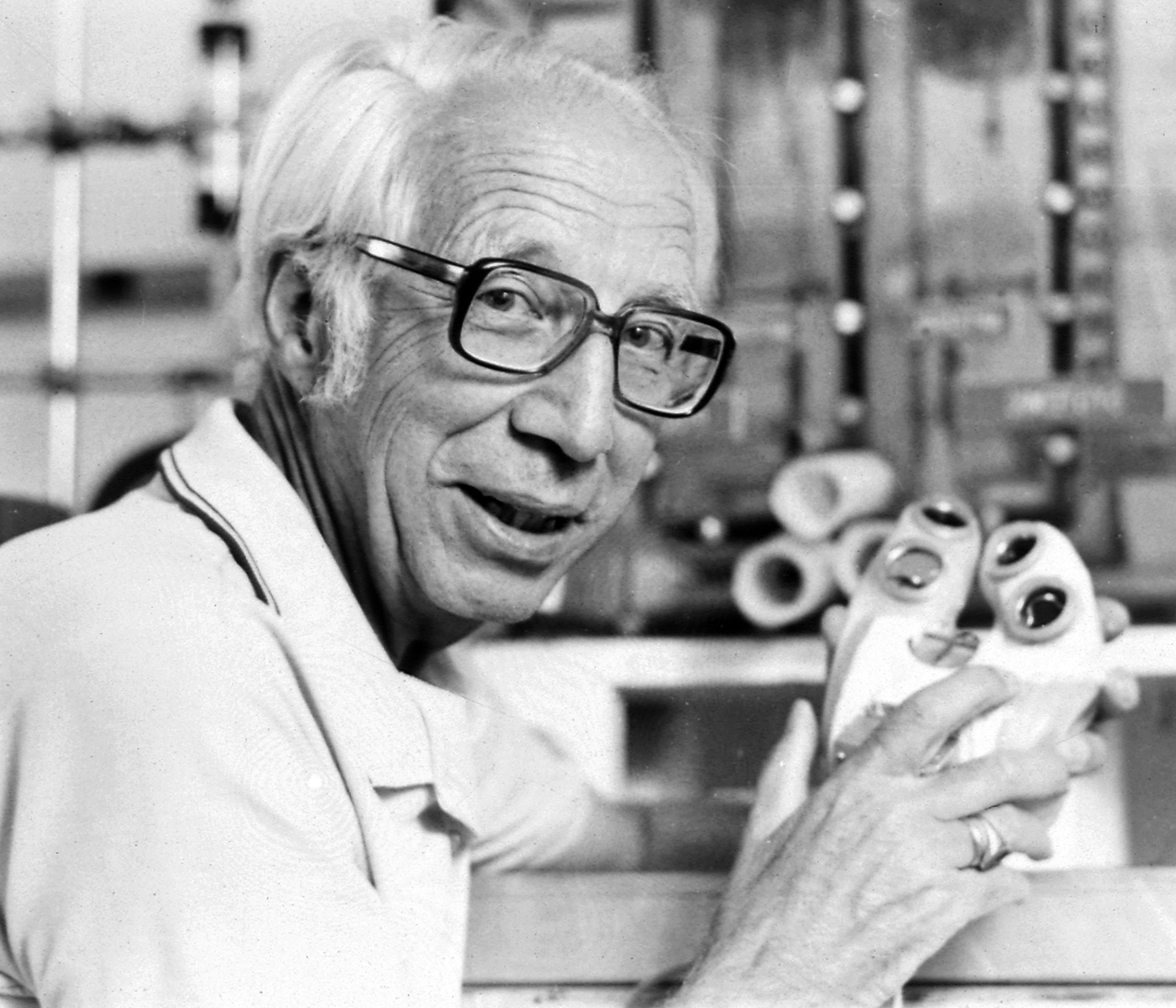 Kolff knew from an early age exactly what he wanted to do with his life; he wanted to be the director of a zoo. But, when his father told him there were only three zoos in existence in the Netherlands at that time, Kolff understood he would have to look elsewhere. Though his father was a physician, and the director of a tuberculosis sanatorium, Kolff resisted the idea of studying medicine. "When I was very young," Kolff recalled, "I didn't want to become a doctor because I didn't want to see people die." Thus, it seems fitting then that Kolff became the "Father of Artificial Organs," saving millions of lives through his medical inventions. Kolff is best known for inventing the artificial kidney, that filtered the blood of those patients suffering kidney failure.

The kidneys are fist-sized organs that are shaped like beans. There are two, and each is located just below the rib cage toward the middle of the back. Though fairly small, the kidneys are powerful workhorses. Each day the kidneys filter about 200 quarts of blood to remove the impurities. These impurities, around 2 quarts, are then excreted in the urine. In addition to filtering out waste materials and excess water, the kidneys also process vital chemicals, like potassium and sodium, and send back them back to the body in appropriate amounts. This complicated filtering process takes place within nephrons, tiny units that contain specialized blood vessels. Each kidney contains about one million nephrons and, when the nephrons lose their ability to filter blood, the result is what we call kidney failure. Early stages of kidney failure may produce lethargy, shortness of breath, and weakness. Swelling may occur, as the body loses its ability to eliminate excess water. As the disease progresses more serious symptoms set in. The buildup of potassium may cause fatal heart rhythms. The excess waste materials circulating in the blood begin to affect all the major organs, resulting in congestive heart failure, decreased mental awareness, and severe anemia. Eventually the unprocessed toxins overwhelm the body and the patient falls into a coma. Without immediate intervention by an artificial kidney, the patient cannot survive.

True genius finds a way. Kolff developed his first artificial kidney while Holland was occupied by Nazi Germany. Kolff moved to the small town of Kampen following the German invasion, and went to work at the municipal hospital. These were dangerous times and Kolff was right in the middle of it. He became a central figure in the local resistance, using his medical expertise to help townspeople avoid arrest by the German forces. He would simulate various diseases on resistors and Jews, and thus helped over 800 people avoid arrest. Meanwhile, he continued his research on an artificial kidney. Since he had few supplies with which to work, Kolff fashioned a device using wooden barrels, cellophane tubes, and laundry tubs. Because of this, they were nicknamed "washingmachine kidneys." The tubing, which passed the blood back and forth between the patient and the device, wound around the drum and ran through its hollow shaft. A small motor rotated the drum, so that the blood was filtered, as it was run through a cleansing saline solution that filled the tub. But, this was no sure thing. Fifteen of his first sixteen patients died after no more than a few days; the one patient who survived did so for reasons unrelated to his kidneys. Finally, with the treatment of his seventeenth patient, Kolff found success. A 67-year-old woman, facing certain death, recovered after being treated with Kolff's artificial kidney. This forever changed the treatment of kidney failure. Following the Second World War, Kolff gave away several of his artificial kidneys to clinicians throughout the world, so the treatment of kidney failure could become more widespread.  This was the humble beginning of modern day dialysis.

Unfortunately, Kolff's artificial kidney only worked on patients with temporary kidney failure, for dialysis could only be done a few times before it irreparably damaged the veins.  It was 1960 before a solution was found by Belding Scribner, who developed the Scribner shunt, a teflon device that could allowed dialysis without ruining one's veins. Together, Kolff and Scribner's discoveries paved the way for the common dialysis centers located in most communities that keep 500,000 people a year alive in the U.S.

Though Robert Jarvik is more famous for the creation of the artificial heart (the Jarvik 7), Kolff's role is often overlooked.  It was Kolff who hired Jarvik, while directing the Institute for Biomedical Engineering at the University of Utah, to do research on the artificial heart. And, it was Kolff who supervised the first transplant of an artificial heart into a patient in 1982 - Barney Clark, who lived for an additional 112 days before succumbing to pneumonia.
Written by science writer, Tim Anderson

Snippets
Kolff Quote
When I was this young assistant at the University of Groningen my responsibility was for the patients in four beds. That was all I had to do. And, one of these patients was a young man, 22 years old, who slowly and miserably died from renal failure. He became blind, he vomited, and it was a miserable death. And I, as a very, very young physician, had to tell his mother, in a black dress and a little white cap like the farmers have, that her only son was going to die. I couldn’t do a damn thing about it. So, I began to think, “If I could just every day remove as much urea as this boy creates, which is about 20 grams, then the boy could live.” Well, he died, but I began to work.

Kolff was finishing his medical education when WWII started. As soon as Kolff received his certificate of a specialist in internal medicine, he searched out a small hospital in a small town to distance himself from the German occupying government. His salary was $4,000 a year and he told himself, “Now I can afford to make an artificial kidney.”

Kolff Quote
I knew exactly what I wanted to do. I wanted to use dialysis to remove urea and other products that are excreted by the kidney. I filled a small piece of cellophane tubing, about 40 centimeters long, with blood. I added urea to it, I shook it up and down in a bath with saline, and from this I could calculate that I needed ten meters of this stuff, and that the blood had to be continuously in motion, and the dialyzing fluid also in motion. I also had Heparin to prevent clotting. All I had to do was to make a machine with sufficient surface area to make it worthwhile, and that’s what I did.

Kolff had a company make his machine, and he recalls it was very reasonably priced:
When it came time to pay the enamel factory, it turned out that the Germans did not allow any Dutch company to work for anybody else but the German Wehrmacht — that’s the army — so they never could give me a bill, and I never paid for it.

Dr. Kolff on his first successful dialysis patient
Sophia Schafstad was the first patient where you can honestly say she would have died had she not been treated with dialysis. She was in a prison right after the war, for collaborating with the Germans and many of my fellow countrymen would have liked to wring her neck. And, she was brought to us in renal failure. My duty is not to wring her neck, but to treat her. And we treated her. She was comatose when she came in. And after so many hours of treatment I bent over her and said, “Mrs. Schafstad, can you hear me?” And she slowly opened her eyes and said, “I’m going to divorce my husband,” and she did. This woman was a Nazi, and when I talked about her a few months later in London, I said, “It’s now been proven that the artificial kidney can save a life, but it’s not been proven that it’s of any real use to society.” The moral is that we have to treat patients when they need help, even if we don’t like them. (Mrs. Schafstad lived seven more years). 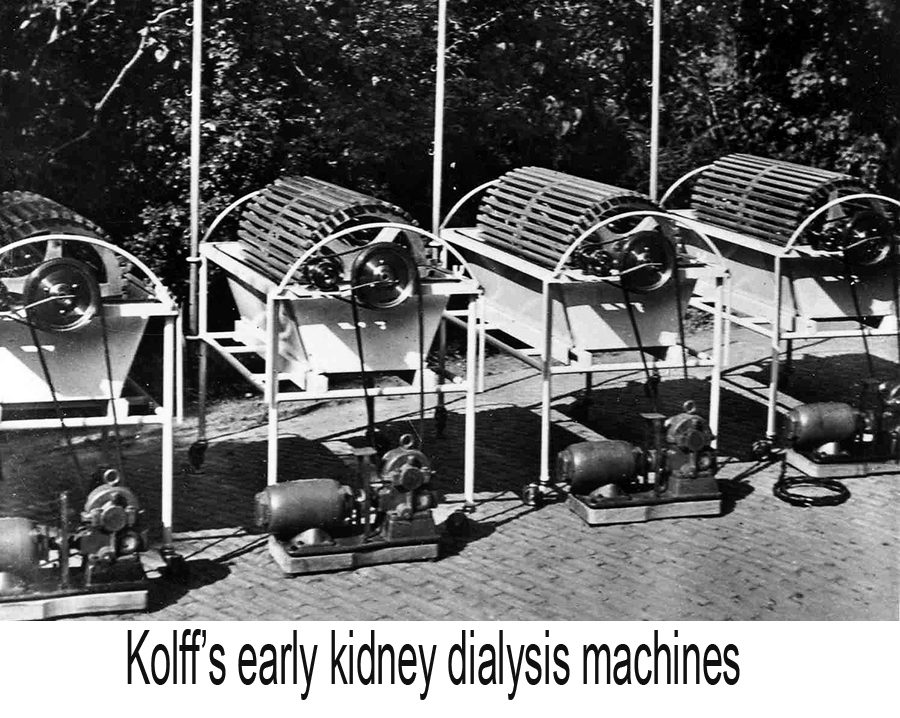 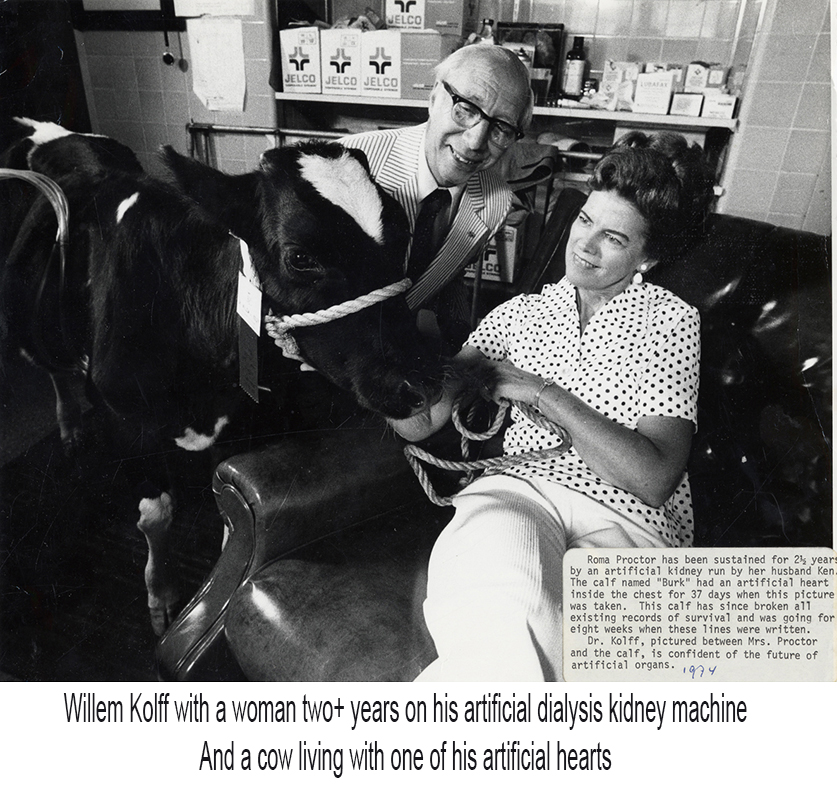 Books About the Scientist
Willem Kolff and the Invention of the Dialysis Machine (Unlocking the Secrets of Science) (Ages 9-12) Mitchell Lane Publishers, 2002. By Kathleen Tracy