Drew Weissman is an infectious disease physician. In addition to being a regular doctor, he is a researcher, having earned both an MD and a PhD. He made his innovative mark on medicine by approaching it through mRNA. The m is for messenger and messenger RNA carries instructions from your cell’s DNA to ribosomes, telling them which proteins to make. Our bodies may have as many as 400,000 different proteins and they are what keep us functioning and alive. Scientists hypothesized that it might be possible to make synthetic mRNA that tells the body to make whatever proteins we want, including medically useful ones. But it was much easier hypothesized than done, until Weissman teamed up with Kati Kariko to make it work.

Weissman met Kariko “fighting over the copy machine” at the University of Pennsylvania in 1998. They started talking as an immunologist to an mRNA biologist and Kariko told him she could make any RNA he needed. They decided to work together. Their collaboration would prove to be monumental. Many people want to nominate them for a Nobel Prize in medicine.

When he came onto the scene, she had already been able to get cells to manufacture a particular protein, but when they tried to get live mouse cells to produce it, the mice always got quite sick. The two spent years working to solve this problem and finally succeeded in 2005. In experiments, it is important to have controls with which to compare your experiment. They performed an experiment where they used tRNA (transfer) as the control.  When they compared the mice that received tRNA with the mice that received mRNA (messenger), they noticed that the tRNA mice didn’t get sick. Comparing the structures of tRNA and mRNA, they found that the key difference was one molecule. That molecule was uridine. Upon further investigation, they noticed that human mRNA also contains uridine. The mice didn’t get sick because it recognized tRNA as their own, while it recognized the mRNA without uridine as a foreign body, so the mice’s immune system attacked it. They substituted a very similar synthetic protein, pseudouridine in the mRNA they were making and suddenly the mice didn’t get sick anymore. The substitution allowed them to alter cell function without prompting the immune system to attack.

This was groundbreaking work.  They got busy writing grants, but most were met with rejection.  In 1962 Thomas Kuhn wrote a famous book about how hard it is for even scientists to change their paradigm, their scientific model, even in the face of evidence. And that’s what they ran up against. The medical journal, Immunity did publish their work. But since they were presenting a new paradigm, the news was largely ignored.

Of course, Weissman and Kariko’s goal wasn’t to make a revolutionary discovery. They wanted to make something that would help people, a medicine! As Weismann said, “I’m a clinician and a researcher, and ever since I started doing research, my dream was always that I would develop something that actually benefits people, that goes into people and makes them better, cures their disease, does something to help them.”

So they continued to work on more applications for their mRNA technique and showed they could induce a monkey to make a protein that spurs red blood cell production, erythropoietin.  They became excited because the applications seemed endless – couldn’t the body be induced to make insulin, the substance type 1 diabetics are missing, or other missing enzymes or hormones that cause diseases?  Also, might it be used to make vaccines that were totally different than any previously made? Up to their work, vaccines took years to develop because the virus the vaccine would prevent had to be isolated, grown, inactivated, purified, manipulated…  But theoretically, their technique could cut that time dramatically.

Nor was it enough to make a molecule that could cause the cells in the body to make the proteins they wanted. They had to get the molecule into the cells! It took several more years of testing methods of delivery. They settled on enclosing the mRNA inside a small bubble of fat (a lipid nanoparticle) that protected the mRNA as it traveled throughout the body.  "We basically tested every possible delivery system and found this was the best," Weissman said.

While they didn’t get a lot of attention from academic scientists, two startup medical companies, Moderna and BioNTech, saw the potential and licensed the new technique. Both companies began working on making vaccines with the technique six to seven years before COVID-19 came along, so they were ready to create a vaccine for it when the pandemic hit. One of the revolutionary aspects of these new vaccines is that they can create the vaccine in the lab in literally hours! Afterward, of course there is months of testing before the vaccines are ready for humans, but creating the vaccines themselves is revolutionarily fast.

Weissman and Kariko were vaccinated with the new COVID vaccination on December 18, 2020 at the University of Pennsylvania’s hospital along with the doctors and nurses. When an administrator told everyone that the scientists whose research made the vaccine possible were there, everyone clapped. Kati Kariko wept. Drew Weismann said, “My dream was always that we develop something in the lab that helps people… I’ve satisfied my life’s dream.”

By August of 2021 the two mRNA vaccines had been given to more than 200 million people in the U.S. and Europe, cutting the sickness and death rate amongst those vaccinated dramatically. The companies contracted to produce another 1 billion doses for the rest of the world. And that is just the start of Weismann and Kariko’s revolutionary mRNA medicine.
Written by science writer, Martha Pat Kinney

Lives Saved:   Over 1,000,000
Snippets
Weissman Quotes
I've been working on RNA my entire career. It's what I'm good at, what I find enjoyment in.

If you look back, RNA was first injected into an animal with the idea of using it as a therapeutic in 1990. It didn't go anywhere for therapeutics after that… until Kati Kariko and I started working on RNA to try and understand why it was so inflammatory. We figured that out, and then we figured out how to make it non-inflammatory. And after that, is when the vaccine field and other RNA fields took off.

Derrick Rossi, Co-founder Moderna (the Pharma Co. that developed a mRNA vaccine)
If anyone asks me whom to vote for some day down the line for the Nobel Prize, I would put them front and center. That fundamental discovery is going to go into medicines that help the world.

Your cell's DNA sends messenger RNA (mRNA) out into the cell to instruct it to make specific proteins. Proteins are what makes our cells, and us, function. Once the mRNA does its work, it is timed to self-destruct.  That's one of the reasons scientists chose mRNA for vaccines - it does its job and self-destructs.


The vaccine provides just enough mRNA to make just enough of the spike protein on the outside of the covid virus for a person’s immune system to generate antibodies that protect them if they are later exposed to the virus. The mRNA in the vaccine is soon destroyed by the cell – just as any other mRNA would be. The mRNA cannot get into the cell nucleus and it cannot affect a person’s DNA. 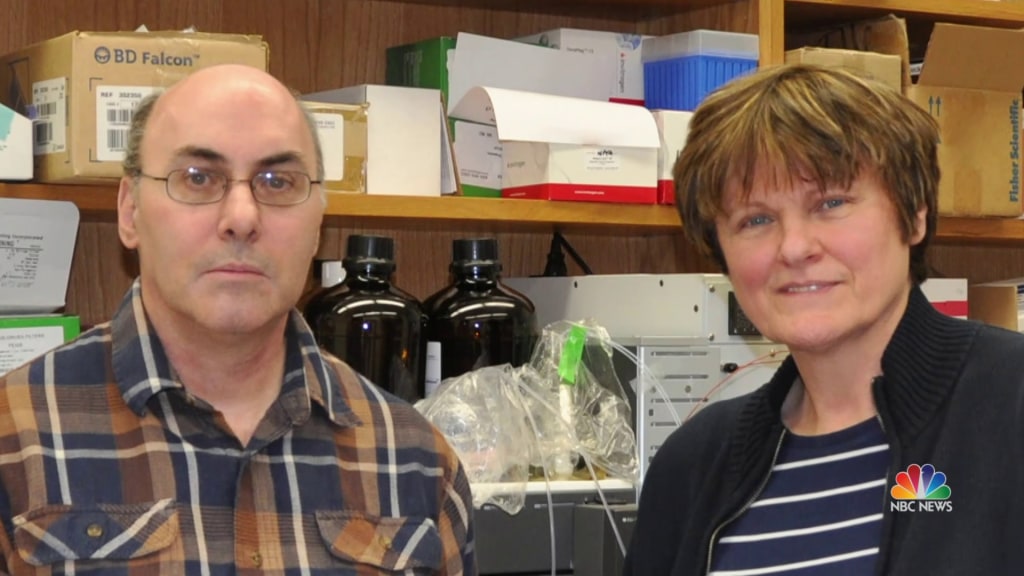