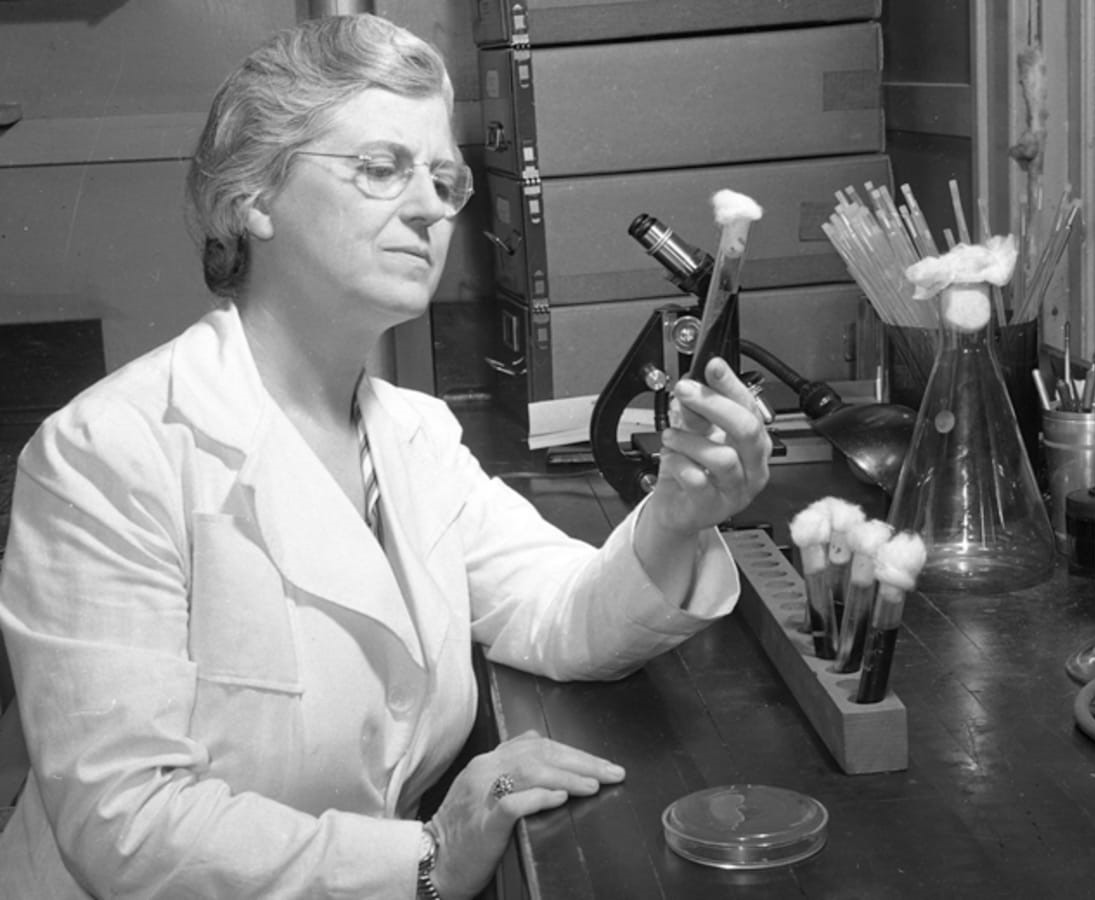 In 1893, when Pearl Kendrick was a three-year-old growing up in Wheaton, Illinois, she was struck with a case of whooping cough - known as pertussis to scientists, named after the bacteria (Bordetella pertussis) that causes it. Four and one-half decades later she would have her revenge, developing the first effective vaccine to combat the ravenous disease.

Measles, scarlet fever, tuberculosis, diphtheria, polio... These are all dreadful diseases, but none claimed as many young lives in the United States in the1920s as whooping cough. Whooping cough is an upper respiratory infection, often beginning quite mildly. The initial common cold-like symptoms worsen over the first couple of weeks, resulting in the production of thick mucus and severe coughing bouts. The coughing bouts cause children to lose their breath, turn red, and sometimes vomit. At the end of the bout, the child may desperately suck in air, resulting in the "whooping" noise for which the disease is named. Potentially life-threatening complications include dehydration, pneumonia, pulmonary hypertension (a restriction of the arteries within the lungs), and bacterial infections.

At its height, whooping cough claimed over 6,000 lives each year in the United States. Remarkably, during the 1940s, it was responsible for the deaths of more infants than polio, measles, tuberculosis, and all other childhood diseases combined. Chicago officials were so alarmed they required infected children, following a two-week quarantine period, to be accompanied by an attendant and to wear a yellow armband with the words "Whooping Cough" written in large black letters on it.

After an early stint in public education, Kendrick immersed herself in public health, eventually earning her Ph.D. in microbiology from Johns Hopkins University. She developed her whooping cough vaccine while directing the Western Michigan Branch Laboratory in Grand Rapids, Michigan. Kendrick and Grand rapids made the perfect team. Kendrick was a brilliant researcher and Grand Rapids was a model community, promoting a vibrant children's health program. But, this was the heart of the Great Depression and funding was virtually nonexistent. That didn't stop Kendrick who, along with her partner Grace Eldering, developed the vaccine primarily during her off hours. "When the work day was over," Kendrick later reminisced, "we started on the research because it was fun. We'd come home, feed the dogs, get some dinner and get back to what was interesting." Kendrick's dedication paid off. Using Grand Rapids as a self-contained clinical trial, Kendrick began, in 1932, with a small group of local physicians. She both collected samples from them and then later provided them with the first test vaccines.

Kendrick, though modest and not interested in personal acclaim, was nonetheless tenacious in her pursuit of the pertussis vaccine. In 1936, in desperate need of additional funds to continue her work, Kendrick invited First Lady Eleanor Roosevelt to spend the day at her laboratory. Mrs. Roosevelt may have found a kindred spirit in Kendrick, as the First Lady had begun to investigate the practice of using orphans in vaccine research. This practice appalled Kendrick, and she instead used the strong ties she built with the residents of Grand Rapids to find willing volunteers for her research. Mrs. Roosevelt spent a full thirteen hours with Kendrick that day - she later helped find the funding to add several workers to Kendrick's staff.

This allowed Kendrick and Eldering to continue a large-scale trial they had begun in 1934, which eventually involved over 5,800 children. The results were stellar, with the children who received the active vaccine demonstrating a strong immunity. Kendrick also settled the issue of quarantine times, which were being hotly debated, with some isolation periods being as short as two weeks. Her research revealed children were infectious through three weeks but, after five weeks, over 90 percent were non-contagious. Michigan adopted her standard and set a 35 day quarantine.

By 1943, Kendrick's and Eldering's vaccine was in routine use throughout the United States, and by the early 1960s the rate of incidence of whooping cough had plummeted to less than 5 percent of the 1934 rate. In 1942, motivated by their concern of "lessening discomfort of the child," Kendrick and Eldering combined three vaccines into a single shot, the Diphtheria, Pertussis, and Tetanus (DPT) vaccine which became the standard vaccine nationwide.

Whooping cough has had a resurgence recently with 18,000 cases reported in 2019 in the U.S., due to kids not being fully vaccinated (an initial shot and 4 boosters are necessary). The World Health Organization estimates over 24 million cases occur worldwide each year, resulting in over 160,000 deaths.

Snippets
Thomas Jefferson's two year-old daughter Lucy, died from Whooping Cough while he was in France
Lucy Elizabeth Jefferson (May 8, 1782 - October 13, 1784)
October 13, 1784, Elizabeth Wayles Eppes wrote to Jefferson:
Its impossible to paint the anguish of my heart on this melancholy occasion. A most unfortunate Hooping cough has deprived you, and us of two sweet Lucys, within a week. Ours was the first that fell a sacrifice. She was thrown into violent convulsions linger’d out a week and then expired. Your dear angel was confined a week to her bed, her sufferings were great though nothing like a fit. She retain’d her senses perfectly, calld me a few moments before she died, and asked distinctly for water.

Both Grace Eldering and Pearl Kendrick obtained Doctor of Science degrees from Johns Hopkins University. At the time, this was rare, as until the 1970s many universities’ graduate programs weren’t open to women.

Johns Hopkins allowed women due to money. When the medical school was built in 1889, the university’s trust fund had lost money in railroad stocks. They turned to four of the original university trustee’s daughters, who offered a deal. They would raise the needed money, if the school opened its doors to women.

A life saved by prevention cannot even be identified. Who are the men and women living today who would be dead from whooping cough had it not been for Pearl Kendrick’s vaccine? We can conclude with reasonable certainty that several hundred thousand of them are now leading productive lives, in this country alone. But who are they? Name one. You can’t do it and neither can I.…The accomplishments of disease prevention are statistical and epidemiological. Where’s the news value, the human interest in that?
- Richard Remington, Dean University of Michigan

Kendrick shared their vaccines, plates, cultures, and research with scientists around the world and hosted many international visitors in their laboratory. Kendrick traveled the world, often as a consultant for the World Health Organization, helping to establish vaccine programs in Mexico, eastern Europe, and Central and South America. In 1962, she served as part of an exchange delegation on immunology to the Soviet Union.