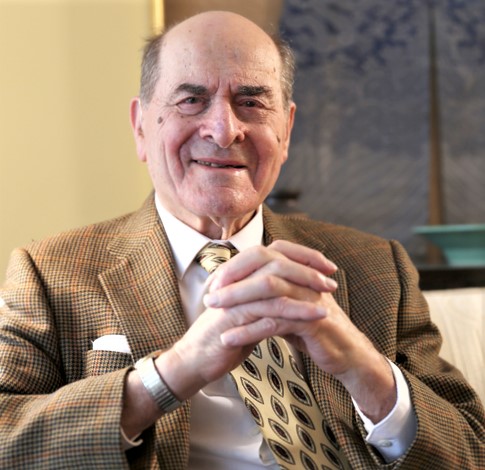 Henry Heimlich, an American Thoracic surgeon, should receive a pat on the back for his life saving discovery - but don't make it a slap on the back! Heimlich developed his famous technique because he believed back slaps were not only ineffective, but potentially dangerous. As recently as the early 1970s, choking was the sixth leading cause of accidental death. When Heimlich read these statistics in the New York Times, he became so alarmed that he immediately began work on a technique to prevent choking deaths.
Heimlich believed slapping choking victims on the back might actually push the object deeper into their chest, making it worse. He wondered whether the chest could create enough pressure on its own to eject the stuck object. But, his research soon showed him the chest could not create the needed pressure-unless assisted by additional pressure from the diaphragm. The diaphragm is a dome shaped sheet of muscle that extends across the bottom of the rib cage. It contracts to help us fill our lungs with air, and then expands to help us empty our lungs of air during normal breathing.

Heimlich first reported on the details of his technique in 1974. Originally called the ‘Abdominal Thrust Maneuver,' the technique allowed someone to apply pressure to a choking victim's diaphragm. This pressure then forced air against the object, dislodging it from the throat. The action is similar to how the pressure of a fizzy drink forces the cap or cork from a bottle. Soon after his data was released, Heimlich started receiving reports about how it was already saving lives. The Journal of American Medical Association (JAMA) was so impressed with the technique they re-named it the Heimlich Maneuver.

It wasn't until 2000, at 80 years of age, that Heimlich actually had the opportunity to perform his technique on an actual choking victim. He describes hearing a ruckus in a restaurant, "I turned around to see a stranger choking. I did the Heimlich Maneuver, and got it out and then went on and had my lunch."

In addition to being a lifesaving researcher, Heimlich has many personal celebrity connections. Several stars have been saved by his maneuver, including Elizabeth Taylor, Ronald Reagan and Cher. In addition, his wife Jane is the daughter of dancer Arthur Murray and his nephew is Anson Williams, of Happy Days.

Heimlich has said researching the mechanism of the technique was the easy part - the hardest part was making the technique so simple that anyone could use it. "Life is in your hands," he said.

Some Medical Organizations Suggest Five & Five
Five slaps to the back
If that doesn't work, five Heimlich Maneuvers