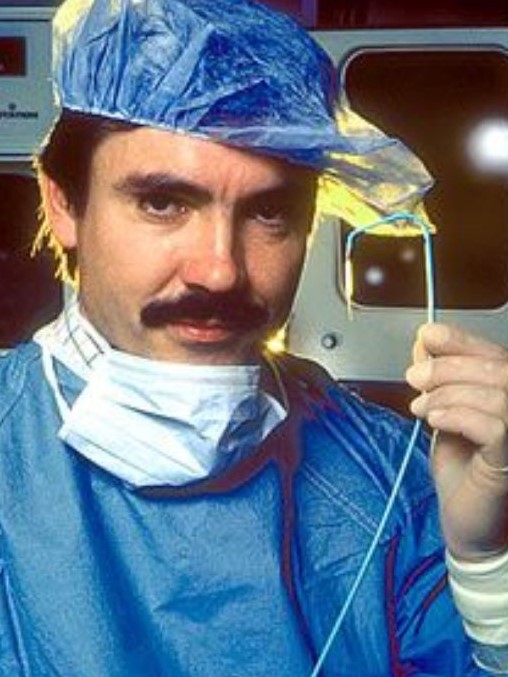 Developed Angioplasty - Starting With Homemade Materials at His Kitchen Table

In the early 1970s, Andrea Gruentzig, a young German doctor, speculated that a balloon could transform the way doctors treat heart disease. Angioplasty is a procedure that is done to reduce or eliminate blockages in the arteries around the heart so that blood flow can be restored to blood-deprived heart tissue. Removing or reducing the blockage lessens chest pain and reduces the need for some medications for most patients. He had learned a method of angioplasty years earlier in Nuremburg. This is a procedure in which a thin tube (catheter) is passed through the interior opening of the blood vessel (the lumen) to treat the unhealthy build up of plaque (atherosclerosis). When he began his practice in Zurich, he considered the advantage of adding an inflatable component to the catheter. Amazingly, he began developing trial versions of this balloon catheter in his own kitchen, searching for possible options for the material and design. By 1975 he had developed a double-lumen catheter (a single catheter tube with two separate channels) fitted with a polyvinylchloride balloon-it was this balloon, first developed at his kitchen table, that revolutionized cardiac treatment.

Before long, Gruentzig began animal studies with his prototype and presented his findings at the 1976 meeting of the American Heart Association. But, he was disappointed to be met with skepticism from many of his colleagues who did not share his enthusiasm for the new device. However, Dr. Richard Myler, did see the potential of the balloon catheter and invited Gruentzig to San Francisco. Together they performed the very first human coronary angioplasty on an anesthetized patient, during bypass surgery. In 1977, back in Zurich, Gruentzig performed the same surgery on a patient who was awake.
In 1977 Gruentzig traveled once again to the American Heart Association meeting, and presented the results of his first four angioplasty cases. This time his colleagues burst into applause, recognizing this breakthrough with a standing ovation. Following the meeting, Gruentzig was in high demand to share his expertise. He felt it was critical to teach this new technique to physicians himself, so he could make them aware of the associated risks and pitfalls. He was concerned that if the procedure was not carried out exactly as he had intended, it could become associated with poor outcomes, so he worked tirelessly to share his knowledge with the cardiac community.

Since the early 1980s, there have been small enhancements in the design and procedure of Gruentzig's angioplasty, but it has remained essentially the same. The balloon is often replaced by a stent in recent procedures. Within little more than a decade after its invention, angioplasty surpassed bypass surgery as the treatment of choice for coronary artery disease.

Sadly, Gruentzig and his wife died in an airplane crash in Georgia on October 27, 1985. He was just 46 years old. His impact on the field of medicine was tremendous, with his breakthrough technique providing surgeons a less invasive means than "open" surgeries to treat coronary artery disease. There are over 2 million angioplasties performed each year, making it one of the most common procedures performed in hospitals around the world.

Snippets
In 1958, at age 19 and intent on becoming a physician, Gruentzig escaped East Germany for West Germany before the Communist government closed their borders.

Gruentzig's answer in a job interview in 1969: “I have dedicated my life to vascular disease”

In early work on patients with leg problems, in which a catheter was used Gruentzig recalled:
I not only observed the procedure itself during this time but also saw the patients before and after treatment and when they left the hospital. I was very impressed with the improvement in peripheral ankle pressure as measured by ultrasound and by the fact that the patient was able to walk without any claudication after successful catheter treatment

Gruentzig's innovation was to put a balloon into a catheter, to enlarge restricted arteries. Gruentzig recounts:
I spent the next two years contacting manufacturing plants in an attempt to solve this problem. Especially fruitful was the cooperation of a factory which produced shoelaces which provided me with silk meshes which I planned to wrap around the balloon, thus limiting its outer diameter. I then needed a very thin balloon to insert within the mesh. It was at that time that I met a retired chemist, Dr. Hopff, a professor emeritus of chemistry […] . He introduced me to PVC compounds. I started to experiment with this material and studied his book on organic chemistry. I acquired some small thin PVC material used as insulation for electrical wires. Following the descriptions in his book, I heated a localized segment of the tubing and applied compressed air pressure resulting in a localized aneurysm of the tubing. I used a second outer tubing measuring 4 mm in diameter to confine the diameter of the segment. After hundreds of experiments, most of which were performed in my own kitchen, I was able to form a sausage-shaped distensible segment which I tried to reinforce with the silk mesh. When I mounted the material on a normal catheter tubing and applied pressure to distend the aneurysmal segment, I suddenly realized that the strength of this material was so great that the silk mesh was not necessary. This was a great breakthrough and enabled me to reduce the size of the catheter.

After using his balloon catheter successfully, the next two years for each patient he custom made one-time use balloon catheters on his kitchen table. This required obtaining an angiogram (image) of the patient's arteries, calculating the optimal diameter and length of the balloon needed, and building the proper sized balloon.

Andreas Gruentzig with a catheter in the lab 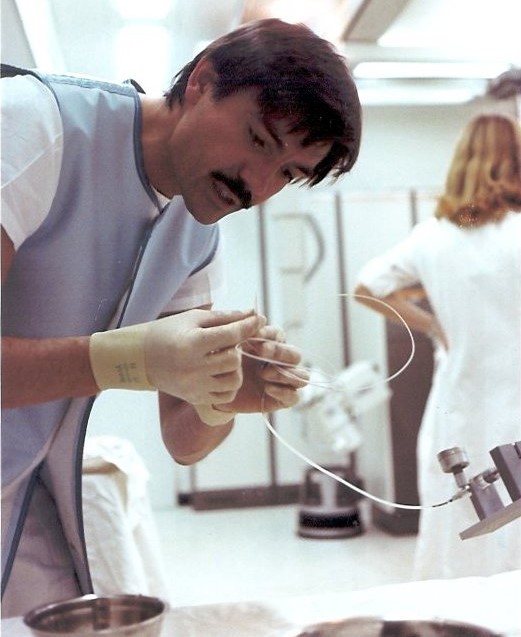 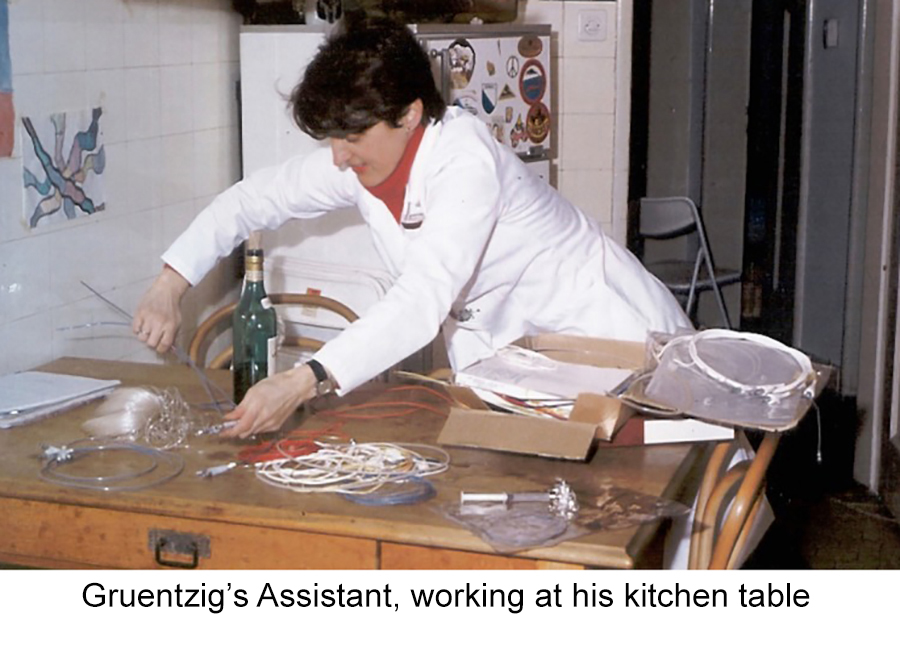 Books About Andreas Gruentzig
Journey into the Heart: A Tale of Pioneering Doctors and Their Race to Transform Cardiovascular Medicine, By David Monagan & David O. Williams