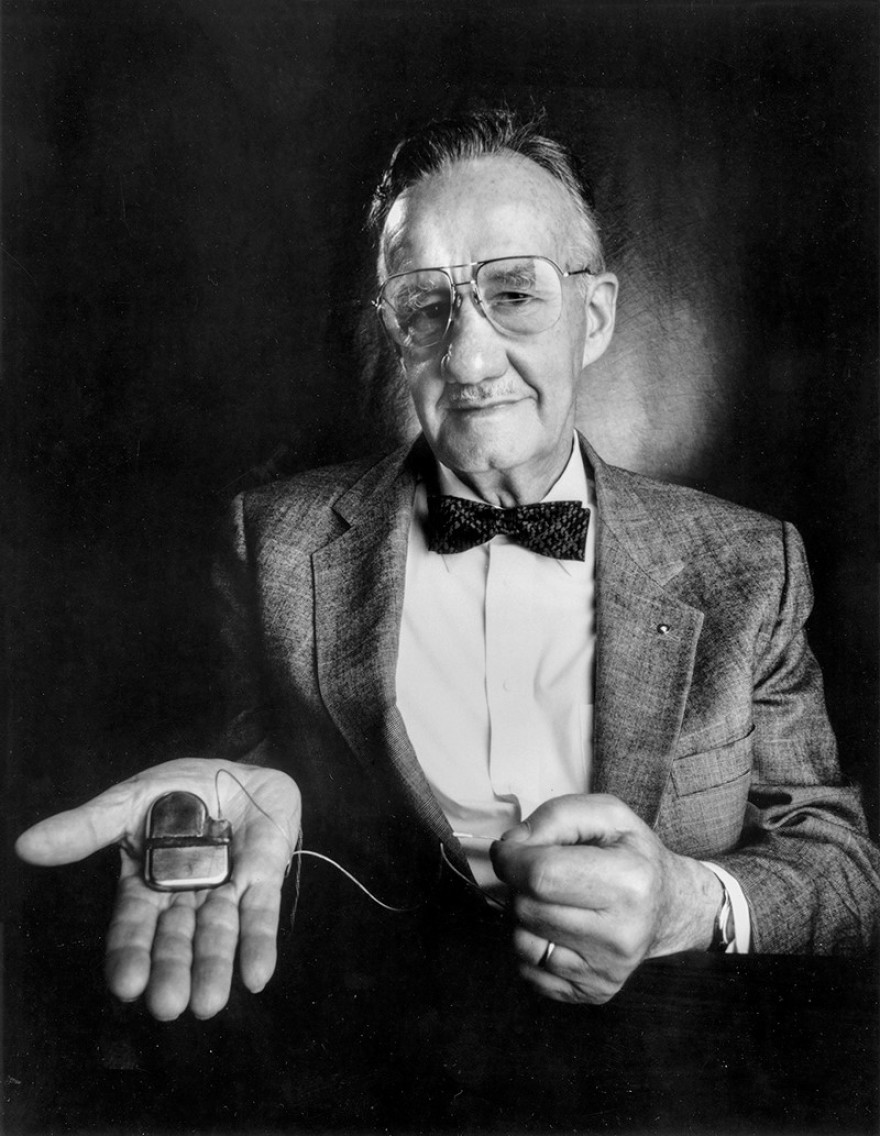 What do lithium batteries, solar powered canoes and implantable cardiac pacemakers have in common? They're three of the over 150 patented inventions of scientific inventor, Wilson Greatbatch.

One of the most significant medical device inventions of all time is the implantable cardiac pacemaker. Surprisingly, the inspiration for its creation began with a mistake on a livestock farm in the 1950s. Greatbatch was working on the animal behavior farm at Cornell University, attaching instruments to sheep and goats to monitor their heart rate, blood pressure and brain waves. While he was building a machine to record the heart sounds he accidentally installed a resistor into the unit. This caused it to give off an electrical impulse which pulsed for 1.8 milliseconds, then stopped for 1 second, then repeated - A rhythm that exactly mimics that of the human heart! One afternoon, two heart surgeons were visiting the farm from New England and, over a brown-bag lunch, they discussed a problem with their patients, called Heart Block. Heart Block occurs when the electrical impulses from the heart's upper two chambers do not reach the lower two chambers. Greatbatch recalled, "When they described it, I knew I could fix it!"
On May 7, 1958, Greatbatch brought the world's first implantable pacemaker to Dr. William Chardack. The device was only two-cubic inches and fashioned out of two Texas Instrument transistors. They attached it to the heart of a dog, touched the two wires together, and then stared in awe as the little device took over control of the heartbeat. The device was crudely made, sealed only with electrical tape, so body fluids caused it to short out after only four hours. But, this success inspired Greatbatch to dedicate himself completely to perfecting the implantable pacemaker. He had saved $2,000 and expected that it would be enough to allow him to concentrate fulltime on this project for two years. He credits his wife for being very resourceful and growing a big garden to feed the family of four during this time.

Setting to work, Greatbatch handcrafted 50 implantable pacemakers in his workshop. This modest beginning laid the foundation for the world's largest medical device company, Medtronics. One of the initial patients was a man who had collapsed at his job at a rubber factory. After receiving his pacemaker, he retrained as a hairdresser and lived for another 30 years! Though the pacemakers were being implanted and saving many patients' lives, the batteries were short lived and had to be replaced every two years. Greatbatch set to work once again, devising a special lithium battery that would last 10 years or more. This battery is now found in almost 3 million pacemakers worldwide.

Greatbatch admits his most gratifying moments were seeing grandparents being able to play with their grandchildren: "Pacemakers put grandpa in the mainstream again." He was known for his commitment and humility and confessed , "if I didn't do it, someone else would have. Most new developments are like that, not somebody having a Eureka flash."

Snippets
Before Wilson Greatbatch's implantable pacemakers, pacemakers were the size of a TV set and painful to use.

Greatbatch, a deeply religious man, describes his breakthrough this way:
"It was no accident, the Lord was working through me… The oscillator required a 10 KΩ resistor at the transistor base. I reached into my resistor box for one, but I misread the color coding and got a 1 MΩ resistor by mistake." When he plugged in the resistor, the circuit started to “squeg” with a 1.8 millisecond pulse followed by a 1 second interval during which the transistor drew practically no current. “I stared at the thing in disbelief,” Greatbatch said. He immediately realized that this small device could drive a human heart. But it took him a while to find a heart surgeon who would believe a pacemaker needed this little energy.

In a lab book about a year later about the first test of his devise in a dog, Greatbatch wrote “I seriously doubt if anything I ever do will give me the elation I felt that day when a 2 cubic inch electronic device of my own design controlled a living heart.”

The three doctors who first began using the implantable pacemakers - Greatbatch and Drs. Chardack and Gage - became known as the bow tie team. “The two doctors wore bow ties because children tend to pull long ties - Greatbatch because long ties got in the way of his soldering.

The next few years involved a great deal of research and experimentation. “I frequently took problems to the Lord in prayer,” Greatbatch says, “and I always got the answer.”
Links to More About the Scientist & the Science
The History of Pacemakers
https://www.ncbi.nlm.nih.gov/pmc/articles/PMC3232561/
A Greatbatch Bio
http://www.livingprimetime.com/AllCovers/dec1999/workdec1999/wilson_greatbatch_man_of_the_mil.htm
The Mars Society Interview
http://chapters.marssociety.org/youth/mc/issue6/mts.php3
Greatbatch's Wikipedia Page
https://en.wikipedia.org/wiki/Wilson_Greatbatch
© 2009 - 2022 ScienceHeroes.com