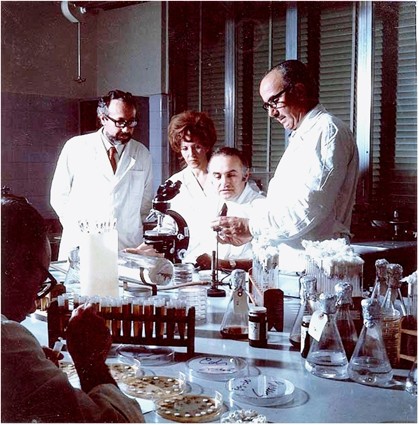 The Italian Who Developed an Antibiotic for TB


Piero Sensi was educated in Naples. In 1950 the pharma company Lepetit Research Laboratories hired him to establish a laboratory of physical chemistry. He created a state of the art lab, and in the next few years made several important advances, including producing a new antibiotic – bromotetracycline, by varying a fermentation process. This success encouraged the company to start a Department of Antibiotics and Natural Products, with Sensi as the Director.  Sensi set about forming a small team of young motivated scientists, who rapidly gained experience in the various disciplines.

In 1957, a bacteria strain was found that had strong antibiotic properties against Gram-positive bacteria. Needing a name for it, and everyone liking a popular French crime film, Rififi, they named it rifamycins. They found 5 types of rifamycins, rifamycins A, B, C, D, & E. Rifamycins B was the least active as an antibiotic. But it it showed very low toxicity and a moderate level of therapeutic activity in animals.

Studying the rifamycins further Sensi's team found that it made a big transformation when it was put into a water solution, making it 5 times stronger as an antibiotic, which they called rifamycin S. But it seemed to be an antibiotic only in vitro (in a lab culture). Injected into animals it didn’t seem to work. Labs experiment on 1000s of substances and they could have stopped working on rifamycins then and there. But Sensi noticed that its UV spectrum indicated the presence of quinone. And he thought that adding an acid to it might transform it into a more water soluble hydroquinone. And since animals contain lots of water, it might then function better. It did, and they named it rifamycins SV, which when injected into mice with infections, healed them.

Sensi believed in the new rational drug theory – that new drugs could be found not only by randomly trying natural substances, but by manipulating natural substances that had good properties, till they had better properties. Not content with a so so drug, he had the team set about generating a compound that had the following characteristics: oral absorption so it could be taken as a pill, slower to be expelled from the blood so it could last long enough to kill bacteria, and still higher antibiotic properties. The final result exceeded all their expectations. They created a drug that would be fundamental to tuberculosis (TB) treatment.

TB has been the scourge of humans for thousands of years. It is infectious, spreading by coughs and sneezes. It is caused by a bacteria that can reside in a person for years with no effect, but when it becomes active, kills about half who have the disease. Historically it was called consumption, due to it’s energy depleting cough causing extreme weight loss, consuming the body. It attacks the lungs and it’s symptoms include a chronic cough with bloody mucous, fever, and night sweats. As of 2018, 25% of the world’s population had latent TB in their body. 80% of people in Asia and Africa test positive for it, and 5-10% in the U.S. test positive. In most people it remains dormant and won’t progress to disease, but for a percentage, it becomes a disease.

Until the 1960s drugs did not work well in curing TB. That changed with the rise of antibiotic cocktails. Because TB quickly becomes resistant to any one antibiotic, scientists learned that giving four antibiotics, worked. The big problem was that the drug cocktail had to be taken for a year and a half to totally rid the body of the bacteria.  Many people quit, allowing the bacteria to repopulate. When Sensi's rifamycin was added to the drug cocktail in the 1970s, it cut the TB drug regimen time in half, from 18 months to 9. If people with TB continually take their meds, TB is now considered curable.

In 2019, about 10 million people fell ill with TB and 1.4 million died. Globally, it is one of the top 10 killers. But the World Health Organization (WHO) has launched an ambitious plan to attack TB. With doctors looking for TB, especially in vulnerable children, and the good drugs available, and DOTS, a comprehensive program to insure drug compliance (see Karel Styblo on our list), TB cases should be able to drop to a trickle.

Written by science writer, Billy Woodward
Lives Saved:  Over 75,000,000Snippets
Enrico Selva on working in Sensi's lab
The group was composed of scientists skilled in disciplines as diverse as soil microbiology, screening, fermentation, purification of broth components and medical microbiology, all working at the same site and encouraged to exchange information both in formal and informal ways.
Giancarlo Lancini on working with Sensi
Piero Sensi was a pleasant person to work with. He had a relaxed attitude toward the events of life. He was never discouraged by a setback and patiently went on to overcome difficulties.

He had a positive attitude toward his collaborators. He used to informally discuss with them the results and advancement of the research projects, encouraging the proposal of new ideas so that everybody felt involved in the progress of research.Key Contributors
Karely Sytblo - DOTS treatment regimen
Piero Sensi - Rifamycin at Dow-Lepetit Research Laboratories (Milan Italy)
Isoniazid – Squibb Institute, Hoffmann-Laroch AG., & Bayer AG
Ethambutol (EMB) – Lederle Laboratory
Pyrazinamide (PZA) – Lederle Laboratory, & Merck, Inc.Links to More About the Scientist & the Science
History of the Development of Rifampin – by P. Sensi
http://citeseerx.ist.psu.edu/viewdoc/download?doi=10.1.1.958.4288&rep=rep1&type=pdf
In memory of Piero Sensi
https://www.nature.com/articles/ja2014104
© 2009 - 2022 ScienceHeroes.com