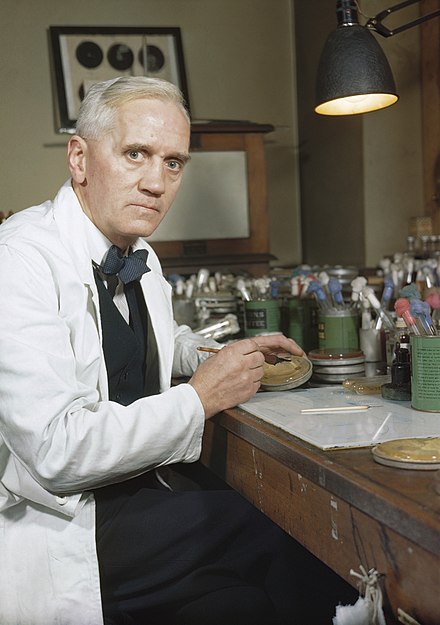 Fleming possessed a naturally curious mind and was a brilliant researcher. But, perhaps caught up in his own thoughts, he was often careless when it came to conditions within his lab. Fortunately, rather than being a problem, his lack of organization led to one of the most significant discoveries in modern medicine. After returning from vacation, Fleming discovered some culture plates he'd forgotten to properly store prior to his trip. The plates were ruined - infected with a fungus, except for a small ring where the fungus wouldn't grow. This immediately captured Fleming's attention and he got to work. He isolated the organism responsible for prohibiting the growth of the fungus, and identified it as being from the penicillium genus. He named it penicillin. But, the penicillin was also extremely difficult to isolate and produce in quantity. After a series of inconclusive experiments, Fleming abandoned his pursuit of penicillin - but he carefully maintained the active strains he had developed, one of which became the starting point for the breakthrough research conducted by Florey and his team.

Today commonplace minor infections are of little concern and are easily treated. But that is only due to antibiotics, of which penicillin was the first. In 1924 President Calvin Coolidge lost his son to a blister.  It became infected and without any good treatment, he died. Fleming's discovery of the antibiotic properties of the mold, penicillin laid the foundation that allowed Howard Florey and his team to develop the the drug, penicillin by the early 1940s.  Few have died of blisters since.

Snippets
Like many youth, Alexander Fleming didn't find an immediate career path at graduation. He worked 4 years in shipping. Then his uncle died, leaving him enough money to go to medical school at St. Mary's in London, where he graduated with distinction in 1906.

Fleming didn’t intend to go into research. But at St. Mary’s Fleming was a crack shot on its rifle club. The captain of the club, not wanting to lose him at graduation, convinced him to remain at St. Mary’s doing research by introducing him to a pioneer in immunology, who agreed to mentor Fleming. And in research Fleming thrived.