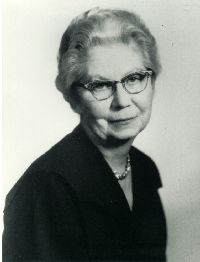 Childhood memories are often powerful reminders of significant events that shape future lives. For Grace Eldering, the childhood memories that shaped her life were filled with pain. She was beset with  whooping cough when she was just five years old, and she never forgot the persistent, painful coughing. She went on to study biology and chemistry, and spent her career searching for ways to ease the suffering of others. She began her career in Lansing, Michigan. Unable to find a paying position fresh out of college, she simply volunteered her time in the laboratory for the first six months. Her service was rewarded and she was given a paid position in Grand Rapids, where she joined forces with Pearl Kendrick. The duo would revolutionize the treatment of whooping cough, known as pertussis to scientists since that is the name of the bacteria that causes it.

Measles, scarlet fever, tuberculosis, diphtheria, polio... These are all dreadful diseases, but none claimed as many young lives in the United States in the1920s as whooping cough. Whooping cough is an upper respiratory infection, often beginning quite mildly. The initial common cold-like symptoms worsen over the first couple of weeks, resulting in the production of thick mucus and severe coughing bouts. The coughing bouts cause children to lose their breath, turn red, and sometimes vomit. At the end of the bout, the child may desperately suck in air, resulting in the "whooping" noise for which the disease is named. Potentially life-threatening complications include dehydration, pneumonia, pulmonary hypertension (a restriction of the arteries within the lungs), and bacterial infections.

At its height, whooping cough claimed over 6,000 lives each year in the United States. Remarkably, during the 1940s, it was responsible for the deaths of more infants than polio, measles, tuberculosis, and all other childhood diseases combined. Chicago officials were so alarmed that they required infected children, following a two-week quarantine period, to be accompanied by an attendant and to wear a yellow armband with the words "Whooping Cough" written in large black letters on it.

In 1932 using Grand Rapids as a self-contained clinical trial, Eldering and Kendrick began, with a small group of local physicians. Eldering worked tirelessly, volunteering her expertise and her labor, often working long into the night after completing her normal workday. "We learned about the disease and the Depression at the same time," Eldering remembered. "We collected specimens by the light of kerosene lamps, from whooping, vomiting, strangling children. We saw what the disease could do." Her childhood memories compelled her to keep searching for a solution to ease the suffering of the children of her day. When they finally had a vaccine, they turned to the local doctors with the first test vaccines. Following promising early results, they conducted a large-scale trial from 1934 to 1937, involving over 5,800 children. The results were stellar, with the children who received the active vaccine demonstrating a strong immunity. By 1943, their vaccine was in routine use throughout the United States, and by the early 1960s the rate of incidence of whooping cough had plummeted to less than five percent of the 1934 rate. In 1942, Eldering and Kendrick combined three vaccines into a single shot, the Diphtheria, Pertussis, and Tetanus (DPT) vaccine.

Whooping cough has had a resurgence recently with 18,000 cases reported in 2019 in the U.S., due to kids not being fully vaccinated (an initial shot and 4 boosters are necessary). The World Health Organization estimates over 24 million cases occur worldwide each year, resulting in over 160,000 deaths.

Snippets
Thomas Jefferson's daughter Lucy, died from Whooping Cough while he was in France
October 13, 1784 letter from Elizabeth Wayles Eppes to Jefferson:
Its impossible to paint the anguish of my heart on this melancholy occasion. A most unfortunate Hooping cough has deprived you, and us of two sweet Lucys, within a week. Ours was the first that fell a sacrifice. She was thrown into violent convulsions linger’d out a week and then expired. Your dear angel was confined a week to her bed, her sufferings were great though nothing like a fit. She retain’d her senses perfectly, calld me a few moments before she died, and asked distinctly for water.

Both Grace Eldering and Pearl Kendrick obtained Doctor of Science degrees from Johns Hopkins University. At the time, this was rare, as until the 1970s many universities’ graduate programs weren’t open to women.

Johns Hopkins allowed women due to money. When the medical school was built in 1889, the university’s trust fund had lost money in railroad stocks. They turned to four of the original university trustee’s daughters, who offered a deal. They would raise the needed money, if the school opened its doors to women.