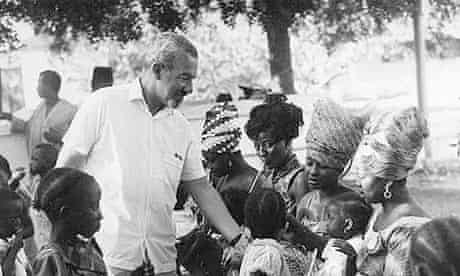 The Eradication of Smallpox Through Worldwide Vaccination
Perfected Freeze-Drying the Smallpox Vaccine, Making Worldwide Vaccination Possible
Smallpox is one of the most deadly diseases in human history, contributing to the destruction of the Incan and the Aztec Empires. Even in modern times, between 1900 and 1970 it killed an estimated 300 million people worldwide - more people than died in WWI and WWII combined. Smallpox is a highly contagious airborne virus. It enters the body through the nose or mouth, as virulent droplets from another person's cough or sneeze. The incubation period is one to two weeks, during which time no symptoms appear. Then, the initial symptoms often resemble the flu, including widespread aches, fever, and vomiting. Next a rash, consisting of small red dots, appears inside the mouth and on the tongue. The rash then spreads to the face, down the torso and soon engulfs the entire body. The red dots turn into oozing pustules and fever continues to rack the body. The following two-week period will determine whether a patient survives. For the most common variation, variola major, 30% will die. Those who survive are riddled with pockmarks, lifelong scars that serve as a reminder of their brush with death.

Beginning abuot 70 years ago, scientists’ understanding of smallpox produced a radical idea. They knew that smallpox is caused by a virus and can be prevented by vaccination. They also knew that the virus’s only host was humans. That meant that if it could ever be eradicated from all humans at once, then forever forward it would cease to exist. All they had to do was vaccinate everyone in the world. That proved logistically impossible, but Bill Foege showed how vaccinating everyone around the disease would suffice. But there was a serious problem. The lifesaving vaccine could only be stored for 1-2 days without refrigeration. And in the 1960s much of humanity lived far away from refrigeration.

Enter Leslie Collier, a virologist and bacteriologist at the Lister Institute in London, England. He recognized the problem and set about solving it. First, he read up on all the other scientific attempts, then began experimenting. He eventually settled on freeze-drying the vaccine. But freeze-drying could kill the weakened virus that made up the vaccine. He tried various methods of preserving the vaccine and eventually hit upon peptone as the key addition. In his 1955 journal article he said,

“Partially purified virus dried in 5 % peptone will withstand storage at 37C (99F) for several months with very little diminution in titre (the concentration of an antibody); indeed, active virus is still present after more than 2 years at this temperature… Preliminary experiments have indicated that satisfactory stability is shown even at 45C (113F).”

Adding glycerin to the freeze-dried vaccine, made it ready to be shot into people’s arms. The vaccine then initiated their immune system to create antibodies. And thereafter smallpox could not take hold in their bodies. Twenty years later and enough of the world had been vaccinated to totally eradicate the disease of smallpox from the world. One of humankind’s greatest achievements!

Snippets
Pocahontas is thought to have died from smallpox.

Abraham Lincoln was coming down with smallpox when he delivered the Gettysburg Address. He wasn't seen for weeks afterward, while he recovered. His valet caught smallpox from Lincoln and died.

The last outbreak of smallpox in the United States occurred in Texas in 1949 with 8 cases and 1 death.

The last person in the world to have Smallpox major was a two-year old girl, Rahima Banu, born in 1973. She lived in Kralia on Bhola Island, Bangladesh. School children throughout the world were shown pictures of kids with smallpox in class and asked to turn in smallpox cases. Rahima's case was reported by an eight-year old girl, Bilkisunnessa, who received a reward of 250 taka. The rewards were offered so that anyone in contact with smallpox could be vaccinated, forming a ring around the person that stopped the virus from spreading.  Rahima survived.

Ben Franklin Lost Franky, his Son to Smallpox and Regretted Not Getting Him Innoculated

“In 1736 I lost one of my sons, a fine boy of four years old, by the smallpox taken in the common way. I long regretted bitterly and still regret that I had not given it to him by inoculation. This I mention for the sake of the parents who omit that operation, on the supposition that they should never forgive themselves if a child died under it; my example showing that the regret may be the same either way, and that, therefore, the safer path should be chosen.”

Vaccines are Ubiquitous & Omnipresent Throughout Our Lives

It is bizarre that vaccines are controversial, when virtually everyone has had vaccines. The average person born today may get 70+ vaccines in their lifetime.

Virtually everyone constantly benefits from vaccines

Links to More About the Scientist & the Science
Collier's Obituary
https://www.theguardian.com/science/2011/may/09/leslie-collier-obituary