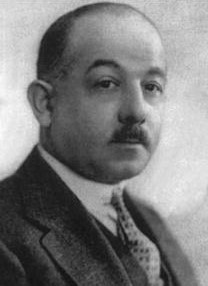 In the early 1900s scientists from all over the world were hard at work in remote hospitals and laboratories. At the time there were few medical journals, many language barriers, and certainly no internet - updating the medical community about new discoveries was extremely challenging! This often resulted in more than one scientist working on the same project without any knowledge that others were doing similar work, or had already made a major discovery. This is what happened to Dr. Aurel Babes, a Romanian scientist. Few people may know who Aurel Babes was, or what scientific discovery he made, but it was a tremendous breakthrough in cervical cancer diagnosis for early detection of cervical cancer leads to almost a 100% cure rate.
Aurel Babes was born in 1886, in Romania. His father, also named Aurel, was a chemistry professor and his uncle was renowned medical scientist Victor Babes-so he was genetically well equipped for scientific greatness. Babes would become an honored physician and gynecologist in Romania. He discovered that if a platinum loop was used to collect cells from a woman's cervix, and the cells were then dried on a slide and stained, it could be determined if cancer cells were present. This was the first screening test to diagnose cervical and uterine cancer. Very excited by the results of his work, Babes presented his findings to the Romanian Society of Gynaecology in Bucharest on January 23, 1927. His method of cancer diagnosis was published in a highly respected French medical journal, Presse Médicale on April 11, 1928. Unfortunately, Babes' incredible discovery was presented in Romanian and published in French, neither of which was easily available to the English-speaking scientific community.

In late 1928 Georges Papanikolaou, a Greek gynecologist, reported that uterine cancer could be diagnosed by means of a vaginal smear - an almost simultaneous discovery made by Babes, although the two used significantly different techniques. Both Babes and Papanikolaou published their findings in 1928, but neither of their articles had an impact. It was 15 years later that Papanikolaou and Herbert Traut published a book about the technique that the idea caught on and took off.  Consequently, the test for cervical cancer screening, for the past 80 years, has been known as the "Pap Smear", not the "Bab Smear." It is said that Aurel Babes was very aware of the great international reputation that Georges Papanikolaou gained in contrast to his own. In a spirit of recognition and fairness, Romania refers to cervical testing as "Methode Babes-Papanicolaou" in honor of Dr. Babes.

Snippets
Aurel Babes studied under Robert Bunsen at Heidelberg University. Bunsen was the creator of the Bunsen Burner.