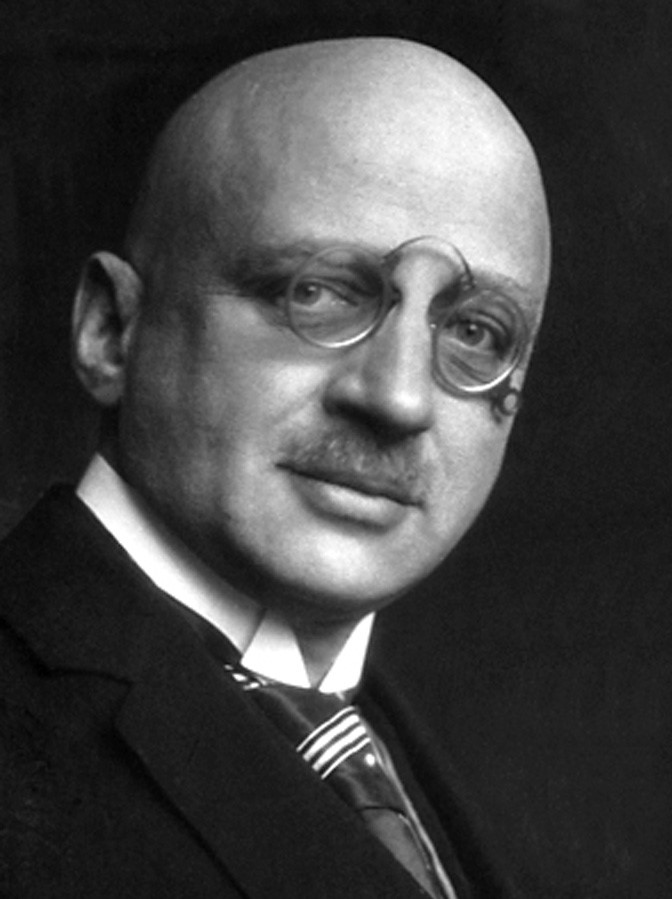 Fritz Haber was a German chemist whose discoveries help the world grow nutritious food for billions of people.  He was born on December 9, 1868 in Breslau, Germany, which is now part of Poland.  Tragically, his mother died shortly after childbirth, not an uncommon occurrence with 19th century medical care. He was raised Jewish, by his father, a well respected chemical merchant in Breslau.  When he was 18 years old, he went to study chemistry at the University of Heidelberg and stayed there until 1891.  One of Haber’s celebrated teachers at Heidelberg was Robert Bunsen, the inventor of the famed Bunsen burner.

A primary chemical in fertilizer that makes plants grow is nitrogen. Nitrogen is very common in the atmosphere, but is very difficult to get out of the air and into a liquid or solid form that can be used. Doing so is known as “fixing” nitrogen. This can only occur naturally with bacteria or lightening. At the beginning of the twentieth century scientists had been trying for more than 100 years to fix or synthesize nitrogen in a man-made manner.

Farmers could get nitrogen out of manure, but there was not enough for large farms.  At the time, sodium nitrate, one of the few available chemicals that could be mined containing nitrogen was available on the coast of Chile.  There, a 220 mile coastline of bird droppings, five feet deep was the largest source in the world.  The global dependence on Chile for this natural source of nitrogen compounds was a concern for many political leaders.  Thus, the 100 year long goal of chemists and other scientists was to develop a method to synthesize these compounds into liquid ammonia, a known compound that would hold fixed nitrogen.  This dilemma became the focus of Fritz Haber’s work during his time at the University of Karlsruhe, beginning in 1894.

Haber published a book about thermodynamics and gas reactions in 1905.  In this book he discussed the theoretical process of producing ammonia from hydrogen and nitrogen.  As he later said in his Nobel Prize speech, “We are concerned with a chemical phenomenon of the simplest kind. Gaseous nitrogen combines with gaseous hydrogen in simple quantitative proportions to produce ammonia.”

But the devil was in the details. The only hints that such could be done required very high pressures and temperatures, and a metal catalyst. Off and on over a number of years, Haber experimented with different temperatures, pressures, and metal catalysts. He made progress using osmium and uranium. Finally, on July 3, 1909, he succeeded in his laboratory in producing ammonia yields on the order of 10% continuously for five hours.

This proved that commercial production was possible. The problem was that Haber’s process occurred in a tube 75 cm tall and 13 cm in diameter. There were no large containers that could operate at the temperatures and pressures he used. At the same company where Haber worked was another chemist, Carl Bosch. Bosch took on the challenge of escalating the chemical process to an industrial level. After thousands of experiments he perfected a method to do so that became known as the Haber-Bosch Process.

Vaclav Smil, in his book Enriching the Earth, says that the Haber-Bosch process "has been of greater fundamental importance to the modern world than ... the airplane, nuclear energy, space flight, or television. The expansion of the world's population from 1.6 billion people in 1900 to six billion in 2000 would not have been possible without the synthesis of ammonia."  The  International Fertilizer Industry Association reports that over 100 million metric tons of nitrogen produced by the Haber-Bosch Process are applied annually to global crops, over half of it to cereal crops. Smil and others have calculated that over 2 billion people, about 40% of those alive, are fed by food grown using fertilizer from the Haber-Bosch process.  Haber received the Nobel Prize for his discovery in 1918.

Haber was born Jewish, but converted to Lutherism. Haber was active during WWI (see Haber's Paradox below). Haber’s dedication to his country likely spared his life when Hitler became Chancellor and purged the Jewish people (and converted Jews as well) from Germany, but he still was forced to leave.  He immigrated to England with his second wife and two children in 1933 to take a position at Cambridge, but decided to go to Switzerland in 1935 because of England’s depressing climate.  On his way to Switzerland on January 30, 1935, he died at age 65.

Snippets
Haber didn't get off to a fast start in his career, as another scientist said of him:
When you entrust the task to a newly hired, inexperienced chemist who knows nothing, then naturally nothing will come out of it. 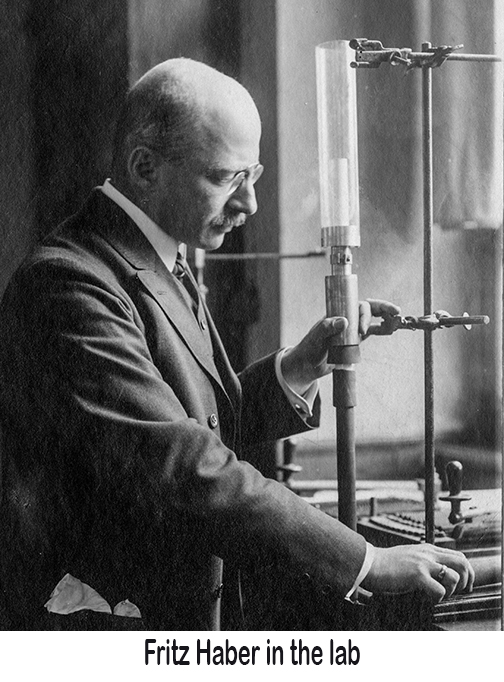 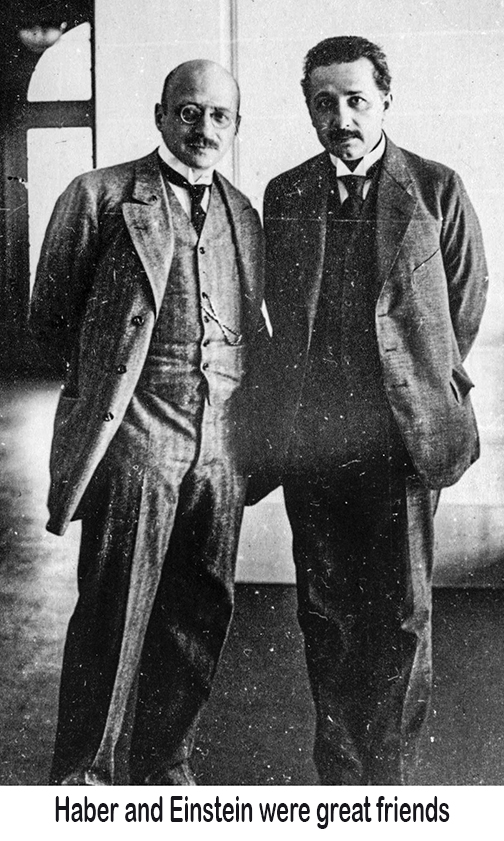 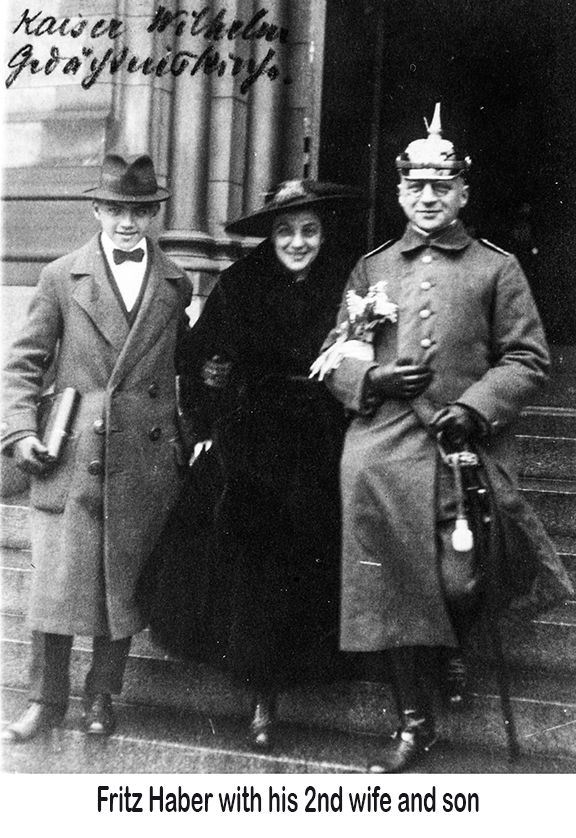 Haber's Paradox - How Could a Man Who Saved So Many Lives Also Destroy Lives?
Haber’s scientific work created a capacity to sustain the world’s need for food production, but his labors also provided the ability to destroy life.  He was so passionate and dedicated to his native Germany, that he used his genius for immoral and destructive purposes when World War I broke out.  During the war Haber worked with the German government to find ways to prolong the life of Germany’s wartime resources and keep them in the war as long as needed.  He developed alternatives to traditional antifreeze to keep vehicles running and his ammonia synthesis methods were used to create nitric acid, a key component in explosives and ammunition.  But Haber’s extensive knowledge of chemistry made him instrumental in a far darker creation - that of chemical warfare.  He initially worked to invent protective chemical devices for troops, but soon switched to developing destructive and fatal chlorine gas to use against the enemy forces.  Fritz Haber directed the very first release of chlorine gas on April 22, 1915 in France, killing over 10,000 allied troops.  Haber’s wife, fellow chemist Clara Immerwahr shot herself in the heart three weeks later.  It is speculated that she was distraught over her husband’s work on poison gas. The morning of her death, Haber left to supervise a gas release on Russian troops.