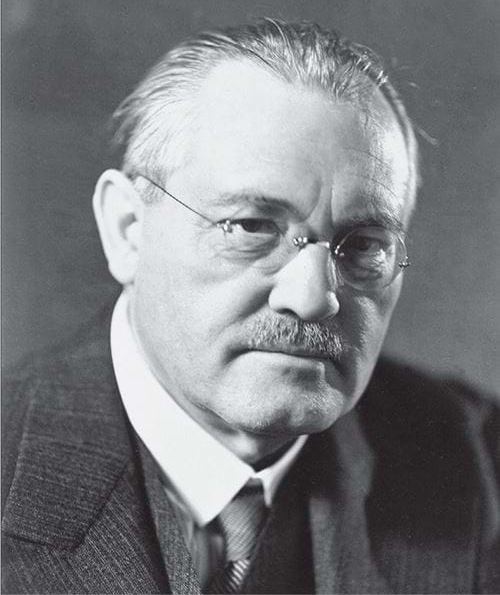 Did you know that there is something in common between your morning cereal and the blue jeans you are wearing?  Both are byproducts of the work of German chemist and engineer Carl Bosch.

Carl Bosch was born in Cologne, Germany on August 27, 1874. His father, also named Carl, was a plumbing and gas supply entrepreneur.  His uncle was Robert Bosch, who led the way in the creation of the sparkplug.  It may have been the influence of his family that encouraged young Carl to take an early interest in science and technology.  He worked in a machine shop as a metal worker after finishing high school. Bosch began his studies in mechanical engineering and metallurgy, the study of metallic elements, at the Technical University of Charlottenburg in 1894.  Within two years, he had transferred to the University of Leipzig to study chemistry and received his doctorate in 1898.

After graduating, Bosch was given his first job as a chemist at Badische Anilin- und Soda-Fabrik (a chemical company still in existence today - BASF).  BASF made fabric and other coal tar dyes.  They recruited Bosch to create a synthetic indigo dye for cotton, the color used in blue jeans.  Carl Bosch was married in 1902 to Else Schilback and had a son and a daughter.  Dedicated to science and lifelong education, Bosch was an avid collector of minerals, gem stones, butterflies and beetles.  While working at BASF in 1908, Bosch met Fritz Haber who had been working on synthesizing ammonia from hydrogen and atmospheric nitrogen.

One of the primary chemicals in fertilizer that makes plants grow is nitrogen. Nitrogen is very common in the atmosphere, but is very difficult to get out of the air and into a liquid or solid form that can be used. Doing so is known as “fixing” nitrogen. This can only occur naturally with bacteria or lightning. At the beginning of the twentieth century scientists had been trying for more than 100 years to fix or synthesize nitrogen in a man-made manner.

Nitrogen based fertilizers provide exceptional nutrients to crops, but in the early twentieth century the demand far exceeded the supply.  At the time, sodium nitrate, the chemical needed to produce fertilizer was primarily available on the coast of Chile.  There, a 220 mile coastline of bird droppings, five feet deep was the largest source in the world.  The global dependence on Chile for this natural source of ammonia and nitrogen compounds was a concern for many political leaders.

Haber solved the 100-year-old problem and was able to create very small amounts of ammonia using high pressure, specific temperatures, and metal catalysts. However, he only did so with a 75 cm tall apparatus and by using rare and expensive catalysts such as uranium and osmium. Bosch's contribution and innovations were on the engineering side. He took up the problem of making it in large quantities. Experimenting on many alternatives, he finally discovered that nitrogen could be refined by an available iron compound.  But his major engineering problem was that the pressure and temperatures needed were so high that no large containers existed in which to perform the process. Bosch set to work developing such containers, and performed over 20,000 individual experiments in over 20 reactors.  Amongst Bosch’s many discoveries, he found that the chamber needed for the reaction had to be double-walled in order to equalize the pressure and maintain temperature. Further problems which had to be solved were the construction of safe high-pressurized blast furnaces and finding a cheap way of producing and cleaning the gases necessary for the synthesis of ammonia. Step by step Bosch increasingly made larger manufacturing units. Within four years Bosch was producing ammonia in a container 8 meters tall. He then created a factory - the Stickstoffwerke (Nitrogen works) in Oppau, Germany, that was opened in 1913. With it Bosch essentially created the fertilizer industry we know today that provides practically every country in the world with sufficient fertilizers for agricultural purposes.

Vaclav Smil, in his book Enriching the Earth, says that the Haber-Bosch process "has been of greater fundamental importance to the modern world than ... the airplane, nuclear energy, space flight, or television. The expansion of the world's population from 1.6 billion people in 1900 to 7.8 billion in 2021 would not have been possible without the synthesis of ammonia."  The  International Fertilizer Industry Association reports that over 100 million metric tons of nitrogen produced by the Haber-Bosch Process are applied annually to global crops, over half of it to cereal crops. Smil and others have estimated that without synthetic fertilizer the world's population could not be fed - a shortfall of over 2 billion people.  On average, one-half of the nitrogen in our bodies comes from synthetic sources, produced by the Haber-Bosch process. Also, without synthetic fertilizer much more land would be needed for crops, destroying much more natural habitat.

In 1931 he received the Nobel Prize in Chemistry for his work in large scale chemical synthesis and high pressure chemistry. It was the first Nobel in chemistry given for practical rather than theoretical discoveries. In 1937 he was appointed president of the Kaiser Wilhelm Institute, Germany’s highest scientific position. However, as a notable critic of Nazi policy, Bosch was removed from this position when Hitler became Chancellor.  Carl Bosch died on April 26, 1940.

Snippets
Before Carl Bosch went to university, he took a year off and apprenticed as a molder, mechanic, carpenter, and locksmith.

In his early thirties, as Bosch  was walking with his wife one day, he suddenly stopped and said, "I will solve the nitrogen problem!"  He did, but it took 10 years more work. 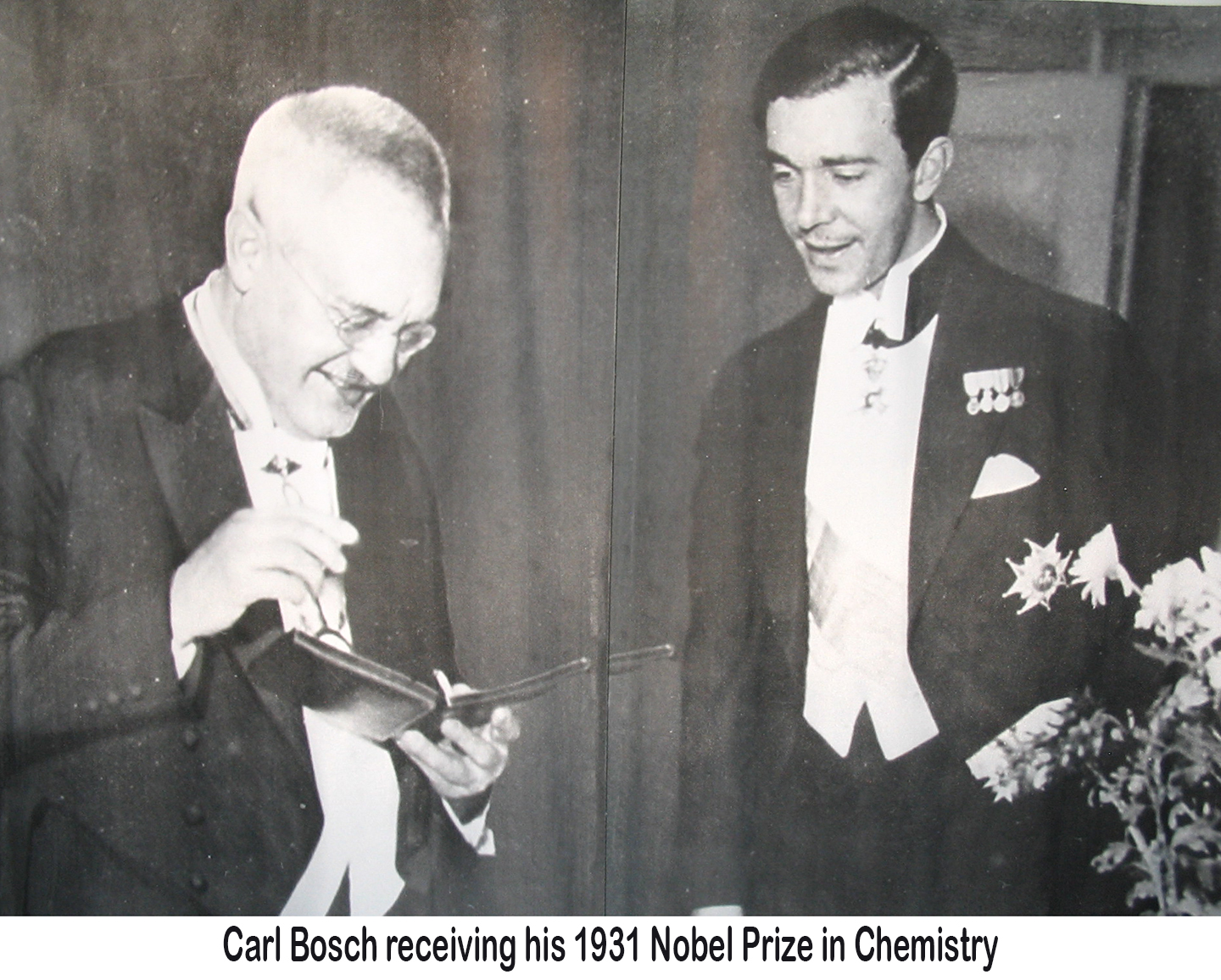 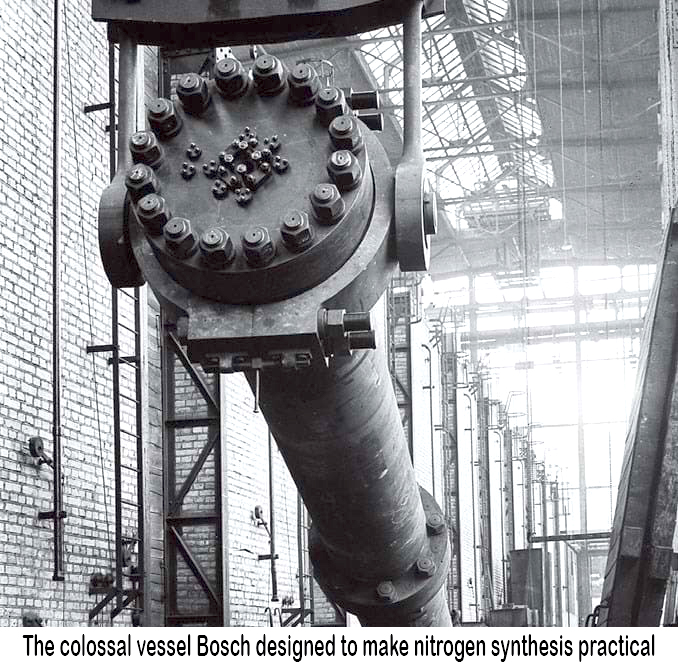