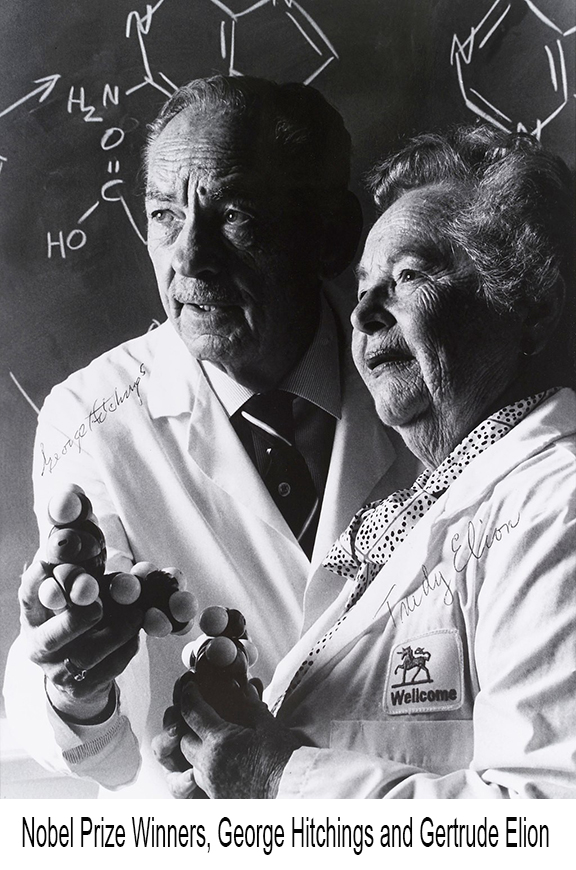 Hitchings & Elion Team Up for Cancer and Gout Drugs

One of the most prolific pharmaceutical researchers ever, George Hitchings can be credited with saving over 5.4 million lives. Those lives saved include leukemia patients, transplant patients, malaria patients, gout patients, and even AIDS patients. What an accomplishment to transform, affect, and save so many lives! The son of a marine architect, he grew up along the west coast of the United States. The death of his father at age 12 heavily influenced his choice of science as a career. "My father died after a prolonged illness when I was twelve years old," Hitchings once wrote. "The deep impression made by this event turned my thoughts toward medicine. This objective shaped my selection of courses in high school and expressed itself when I was salutatorian at my class graduation. I chose the life of [Louis] Pasteur as the subject for my oration. The blending of Pasteur's basic research and practical results remained a goal throughout my career." He went on to the University of Washington majoring in chemistry and then on to Harvard for a Ph.D. At Harvard, he studied nucleic acids, the building blocks of DNA. However, at that time, the structure of DNA hadn’t been discovered, so it was difficult to find a job that allowed him to continue that research line.

Eventually, he landed a job that let him pursue his true interest. In 1942, Burroughs-Wellcome, a pharmaceutical company hired him to research and develop drugs. In 1944, he hired Gertrude Elion and the two developed “rational” drug design. This process involved deliberately designing a new molecule with a specific structure they thought would interact with a molecule in the body to treat a specific problem. This was a new and novel approach to drug development. Prior to it, drug development was mostly trial and error.

This rational and methodical approach paid off handsomely! He accumulated 85 patents in his 30-year career. His drugs primarily affected DNA synthesis which led to anticancer drugs, drugs that would treat malaria, gout, and kidney stones, as well as drugs that suppressed the immune system. This led to drugs to prevent rejection in organ transplants, most notably kidney transplants. His methods also were used by others to develop the antiviral drug, acyclovir, and AZT, the anti-AIDS compound.

As generous as brilliant, Hitchings became director of the Burroughs Wellcome Fund, a non profit organization that promotes biomedical research. He founded the Triangle Community Foundation, to fulfill needs in the triangle area of North Carolina where his lab was. Towards the end of his career he devoted 1/3 of his time to philanthropic pursuits and 2/3 to science. He said of his career, “My greatest satisfaction has come from knowing that our efforts helped to save lives and relieve suffering. When I was baptised, my father held me up and dedicated my life to the service of mankind. I am very proud that, in some measure, I have been able to fulfill his hopes.”

President George H.W. Bush
The President and his wife, Barbara had a daughter they named Robin. At age 4 she came down with leukemia and died. Elion and Hitchings had just developed the future lifesaving leukemia drug, MP6 at that time.  MP6 put leukemia into short-term remission when it first came out. Eventually, when it was combined with other drugs, the cure rate increased from 10% in the 1960s to 90% by the end of the century.

George Hitchings Quotes
We were inspired by basic questions concerning the biochemistry of cellular reproduction, and the search led us on a journey filled with new knowledge and exciting discoveries. That is the dream of every scientist. We have been further blessed with the privilege of seeing our work in the laboratory become medical therapies to combat diseases like malaria, leukemia, bacterial infections and gout.

The practical application of research to the problems of disease is a special strength of the pharmaceutical industry. It is unlikely that such an array of innovative drugs would have emerged from our investigations had we been working in a different research setting.

Our contributions to medicine also were built upon the century-long traditions of Burroughs Wellcome Co. where Gertrude Elion and I pursued our research careers. The company’s co-founder, Sir Henry Wellcome, was an American pharmacist who made research the foundation of his enterprise. He established the Wellcome Laboratories for physiological and chemical research in 1894 and 1896. Wellcome told his scientists, “If you have an idea, I will give you the freedom to develop it.” That philosophy supported us through four decades of research. 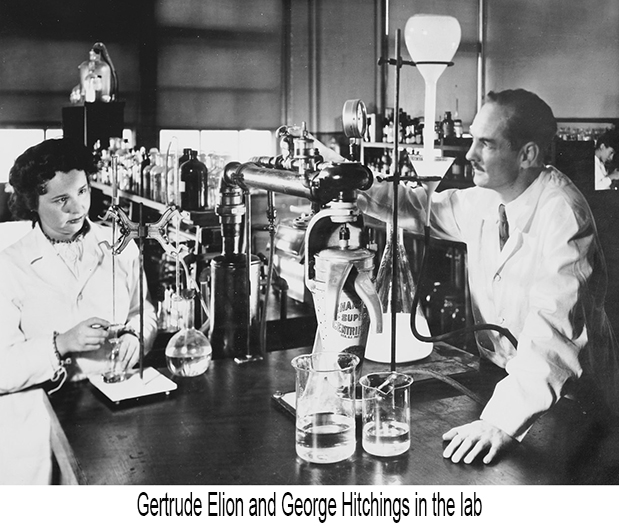 George Hitchings Was a Catalyst for ScienceHeroes.com
ScienceHeroes.com exists solely due to Gertrude Elion & George Hitchings. From my 20s I had gout. For a decade it occurred intermittently, two weeks of agonizing foot pain, then all was well for a year or two. But one year it refused to go away – for two years I was in pain! I couldn’t pet a dog, couldn’t lean against a wall. I thought pain would dominate my life as long as I lived.

My gratitude led me to seek out the biggest lifesavers in history, which to my surprise no one had tabulated before. So, I spent four years researching, culminating in the book – Scientists Greater Than Einstein: The Biggest Lifesavers of the Twentieth Century. Since I only included ten biographies in the book, I founded this website to run the list up over 100, so that it included George Hitchings. Few people know how much we owe lifesaving scientists. Scientists’ discoveries alter the trajectories of all of our lives, for virtually none of us goes through life unscathed by illness. Virtually all of us have our life extended due to scientists’ noble efforts.

A Hearty Thank You!
Billy Woodard, Founder and Author
ScienceHeroes.com
Scientists Greater Than Einstein: The Biggest Lifesavers of the Twentieth Century