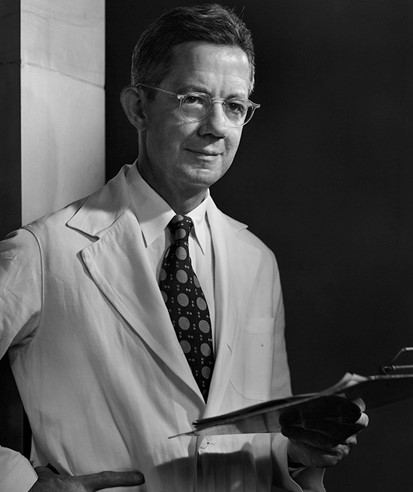 Blalock & His Surgical Technician Gave Infants the Breath of Life

A lifesaving discovery that was one of the first heart surgeries is enough reason to salute heart surgeon, Alfred Blalock.  However, at a time when racial segregation was reality, his relationship with Vivien Thomas was also remarkable. Blalock led his surgical team to develop the “blue baby” operation with African-American surgical technician, Vivien Thomas, beside him every step of the way.
Blue Baby (tetralogy of Fallot) is when an infant has a bluish color because they are born with four different heart malformations.  These malformations prevent the baby’s blood from picking up oxygen from the lungs as it is pumped through the heart.  Since the blood is low in oxygen, all of the baby’s organs are low in oxygen and the baby takes on a bluish pallor. The Blalock-Taussig procedure separated an existing artery and connected it to the pulmonary artery so that the blood could receive oxygen. About 1/3,500 babies are born with this heart defect. Before the blue baby operation, 25% of  babies born with this condition would die before their first birthday, and an additional 70% would die by their 10th birthday.

Alfred Blalock was born in Georgia in 1899 and received his medical degree from Johns Hopkins in 1922.  He went on to complete a surgical residency at Vanderbilt in 1928.  In 1930, he hired Vivien Thomas, an African American to be a laboratory assistant.  At that time segregation existed and blacks were excluded from normal jobs, so Thomas was labeled and paid as a janitor. Blalock recognized Thomas as an extremely talented and meticulous man, and quite unusual for the time, made him  his surgical technician (although his job description remained janitor). Thus started a remarkable collaboration. Thomas only had a high school education, but under Blalock’s direction, he learned the details of surgical equipment and procedures, and went on to design many of his own.

In the 1930s Blalock and Thomas completed groundbreaking research in the causes and treatment of shock. They demonstrated it was caused by volume blood loss leading to whole blood and plasma transfusions as a therapy. Their discovery later saved thousands in World War II. This discovery led Johns Hopkins to offer Blalock a position of surgery in 1941.  Blalock responded that he would not leave his current position at Vanderbilt unless a position were created for his colleague Thomas; they were a “package deal” as colleagues and good friends as well.

Once there, Blalock and Thomas researched the mechanisms associated with blue babies. They first applied their surgical treatments to dogs in their laboratory. Collaboration with pediatric cardiologist Helen Taussig helped them translate their research into a working procedure for the tiniest patients. The first human operation took place on November 29, 1944 on a 15 month old girl named Eileen. Blalock would not begin the procedure until Thomas was there. He used the delicate instruments Thomas developed, and Thomas stood behind him during the surgery, offering suggestions and encouragement throughout. The surgery was a dramatic success, with the little girl suddenly changing her color, when the oxygen flowed through her arteries  Word quickly spread about the success and soon mothers from all over the country were bringing their babies to Johns Hopkins. This operation was the first open heart surgery and the university quickly became the center of the cardiac surgery universe.

Both Blalock and Thomas’ pictures hang in the Johns Hopkins Medical School.

Lives Saved:  Over  1,000,000Snippets
Blalock also did pioneering work on surgical shock.  He demonstrated that surgical shock resulted primarily from the loss of blood and he encouraged the use of plasma or whole-blood transfusions as treatment following the onset of shock. This work is credited with saving the lives of many casualties during World War II.

In 1960, Dr Blalock was depressed by the death of his first wife, Mary, and multiple medical ailments. With the goal of cheering him up and also of recognizing his many accomplishments, several of his colleagues on the Johns Hopkins faculty devised a plan for a 60th birthday party. Dr Blalock was told that the party would be attended by former residents, but in fact, 500 world renown surgeons and medical leaders and their spouses attended.

Something the Lord Made is Available on DVD, Netflix, & Amazon
Something the Lord Made tells the story of Viven Thomas and Alfred Blalock. Better than most docudramas, the movie presents a nuanced history of two great scientists in an age of rampant racism in America. It shows the effects of prejudice on Thomas, an intellectual whose personality tended more toward quiet and studious, than confrontational. The science is presented well, telling the story of the first open heart surgeries, performed to make blue babies whole.