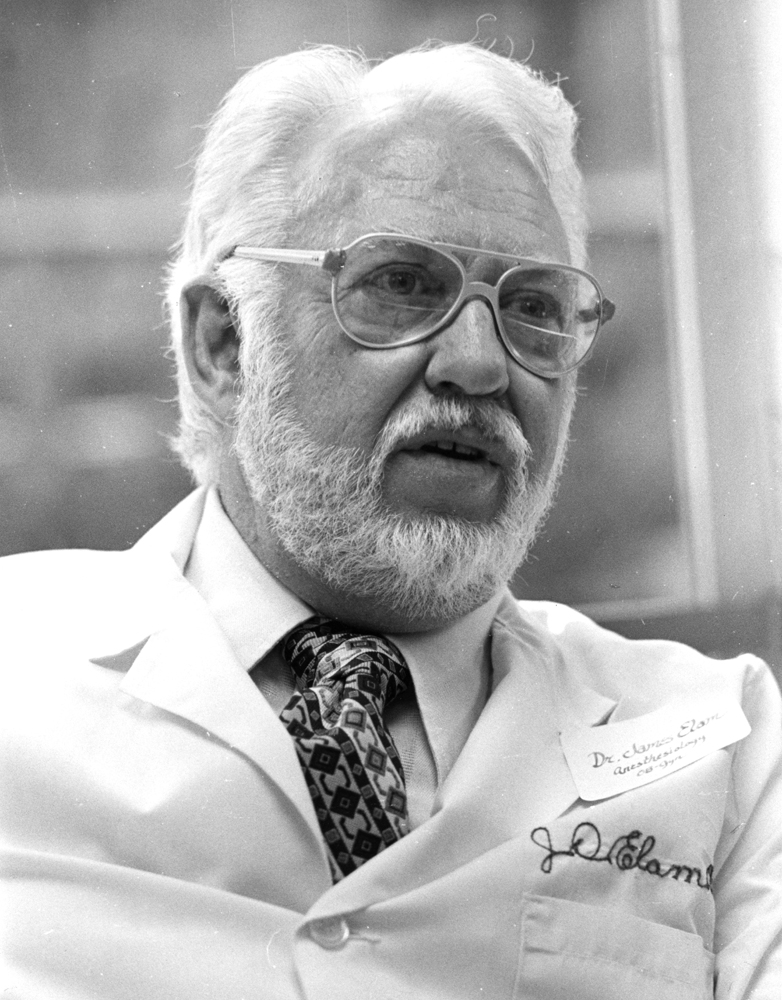 Resusci-Anne to the Rescue
The Start of Cardiopulmonary Resuscitation - CPR

In school we learn that we inhale oxygen and exhale carbon dioxide, but it was James Elam that taught the world that even our exhaled air could be used to saves the lives of others when they cannot breathe for themselves.

James Otis Elam was born on May 31, 1918 in Austin, Texas and received his medical degree from Johns Hopkins in 1945 in Baltimore. Elam was studying to be an anesthesiologist when he began his research using an infrared carbon dioxide analyzer. He studied the cycle of breathing and how carbon dioxide absorbers were used for patients having anesthesia during surgery. This work propelled Elam and his colleagues to construct respiration simulators and eventually ventilation systems. Their machine became the Air Shields Venti-meter Ventilator and was used for the next forty years in hospitals for patients who could not breathe on their own.

Elam became interested in resuscitation when he was taking care of paralyzed polio patients in the mid 1940s. Some polio patients lost their ability to breath for themselves when their body became paralyzed, so they were put on a respirator that was nicknamed an "iron lung." It breathed for them until they regained their breathing ability. When there were more patients on the ward that required Iron Lung treatment than there were iron lungs, Elam had to perform mouth to mouth, or mouth to nose ventilation for these patients, sometimes for hours. In 1952, Elam searched the literature for information about research conducted on mouth to mouth respiration, rather than artificial respiration and was surprised to find it rarely mentioned, and only in newborns. He soon realized that no one had thoroughly studied it before. Using the carbon dioxide analyzer, he determined that someone's exhaled air could provide adequate levels of necessary oxygen to keep another person alive, but only by, "doubling the tidal volumes, because you are breathing for two!" Tidal volume is the normal amount of air needed for breathing.

Around this time, Elam met Peter Safar by chance at an Anesthesiologists dinner in Kansas City. Elam asked if he could hitch a ride back from the meeting with him. During the drive from Kansas City to Baltimore, Safar and Elam discussed their work and quickly realized that they should collaborate. By the end of the car trip further studies were proposed, and soon the two got to work. By March of 1957 Elam and Safar had completed the results of a volunteer study in which they had perfected a technique for mouth to mouth resuscitation. It became a very hot topic within the medical community soon after it was published. The National Academy of Sciences adopted it and declared that backward tilt of the head, with direct mouth to mouth ventilation was the preferred method of artificial respiration for adults and children. This method of exhaled air ventilation was later combined with chest compressions to become cardiopulmonary resuscitation - CPR.

In 1959 Elam wrote the widely distributed instructional booklet, Rescue Breathing and later produced films demonstrating the life-saving technique. To enable people to practice without having to find a critically ill patient, Elam and Safar enlisted the help of a Norwegian toymaker, who created the first "doll" that had the correct anatomical and respiratory features to simulate a real person with breathing difficulties. The doll became known as Resusci Anne or Annie (sometimes called Rescue Anne). Her face was based on the death mask of a young woman who drowned in the Seine River in the 1880s. When people practice on the doll, they can see the chest rise and fall, and feel what it feels like to give actual artificial respiration and CPR. Once they had Resusci Anne, Drs. Elam and Safar were able to launch a huge educational campaign to get the knowledge into the hands and lungs of the general public. This invaluable experience gives regular people the power to change a bad situation into a lifesaving one while waiting for medical assistance.